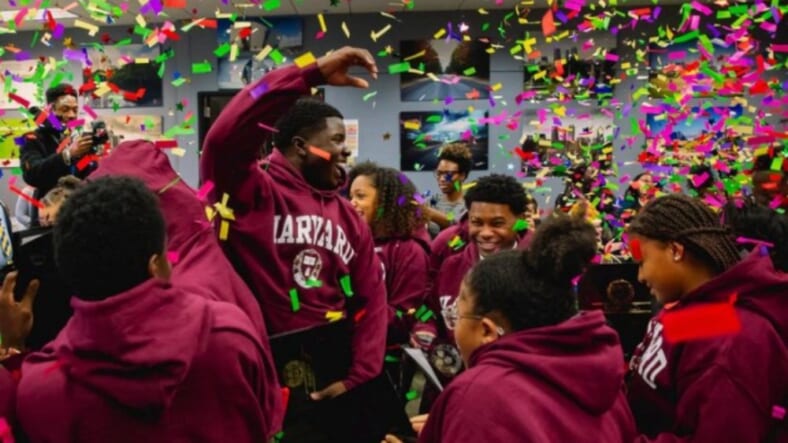 Jordan Thomas, a rising senior at Grady High School in Atlanta, rose up to secure first place at the annual Harvard Debate Council tournament, a competition that pitted him against scholars from all over to debate social and political issues, reports WSBTV.

“Being a young, middle class, black, public school student from the South created a stigma that automatically set me back in comparison to the competition, most of who were international students or from preparatory schools in the Northeast,” Thomas said.

“But I was determined to represent my city and my story. I wanted people to see where I came from and how I could keep up with them.”

Thomas and the other students repped their city well and he was one of 25 African-American students from Atlanta who were chosen by Harvard Diversity Project to attend the tournament.

The Harvard Diversity Project was created by Brandon Fleming to “recruit, train and sponsor minority students to participate in the annual program at the Ivy League university.”

“Our kids dominated the competition,” said Fleming said.“Of our 12 teams, 10 advanced past preliminary rounds.” Fleming is a former teacher at the renowned Ron Clark Academy in Atlanta.

Not only did Thomas excel, two out of the four teams participating beat out hundreds of other students to make it to the semi-final round.

The students were chosen from 16 schools across Atlanta and surprisingly, they had very little experience with debate. There were more than 150 Atlanta applicants, but only 25 were chosen.

It was a grueling process as the students spent eight months learning how to think critically, hone their public speaking and debate skills. Then they attended a two-week intensive summer program in Cambridge, Mass, ahead of the competition.

Harvard Debate Council, which runs the annual summer program at the school’s campus in Cambridge, Massachusetts, divided nearly 400 participants, including high school students from Asia, Europe and Russia, into 12 teams for debate competitions.

“To bring the championship back to Atlanta was the most satisfying feeling, and to walk onto the campus of one of the most elite universities in the world and meet personal and council goals, brings a unique and new satisfaction that I’ve never experienced,” Fleming said.

The Diversity Project begins accepting applications for the summer 2019 residency on Aug. 15.