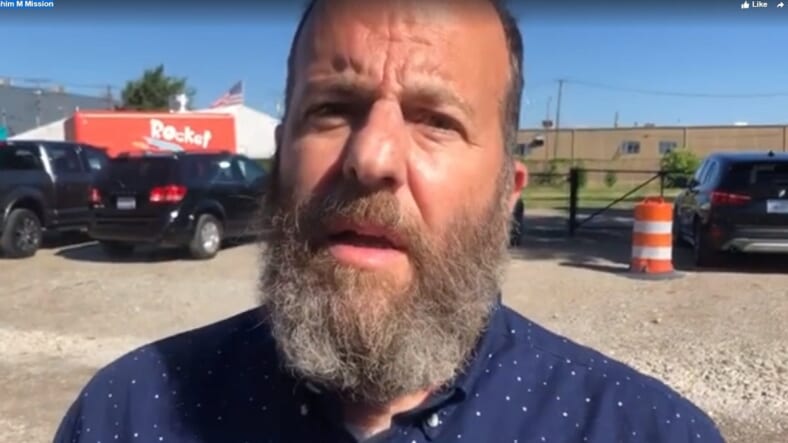 When you think of all of the different ways to express anger or displeasure at someone, one of the worst ways is to spit on them. Well, that’s exactly what a white Detroit business owner did to a Black security guard earlier this week. Now he is paying the price.

Ibrahim Mission, 29, was working as a security guard at a business event last Tuesday morning when Stanzler became enraged that attendees of the event parked on his property. Mission began arguing with Stanzler and pulled out his cellphone and recorded the encounter, which he then posted on Facebook.

Soon after the video starts, Stanzler flips off Mission. When Mission dares Stanzler to do it again, he instead turns toward Mission and spits in his face, as you can see below.

“You know that’s assault, Robert,” Mission is heard saying as the video abruptly ends. Detroit Police arrested Stanzler for simple assault and he was released.

Stanzler’s company — which has been bombarded with 1-star Yelp reviews since the incident — sells various antiques and Detroit- and Michigan-made items. It was also a well-known retailer of Carhartt, which is based in nearby Dearborn, and sells everything from work boots to baseball caps.

But after Stanzler was seen spitting on Mission, that came to a swift end.

“We expect our retailers to conduct themselves in accordance with our values, including respect for others. Carhartt will not tolerate the offensive behavior recently demonstrated by the store’s owner,” the company said in a statement on Friday. “As a result, we have discontinued our relationship with the Detroit Mercantile.”

Stanzler offered up a statement on Wednesday, apologizing and calling his actions “unconscionable, offensive and disrespectful.”

“I take full responsibility for my actions,” the statement read, “and want to convey regret for my gross and despicable behavior during the course of my argument with Mr. Mission.”

Stanzler also apologized to those who witnessed the incident, his staff, other business owners in the area and Detroit residents. The incident has enraged Detroit, particularly those already wary of the city’s changing culture as it undergoes a renaissance following 2013’s bankruptcy.

The city has seen an influx of business and new residents and it has led to tensions between “Old Detroit” and “New Detroit.” However, Stanzler claims on his company website to be “a fourth-generation Detroiter.”

Mission, who grew up in the city, said he has worked security at many different types of events with people from all backgrounds. “I’ve encountered somebody saying a racial slur, somebody not being too happy with security,” Mission told ABC affiliate WXYZ, “but never ran into where an individual, especially a white individual, felt comfortable enough to spit on me,” he said.

Information on Stanzler’s arraignment will be released on Monday, according to the Wayne County Prosecutor’s Office.