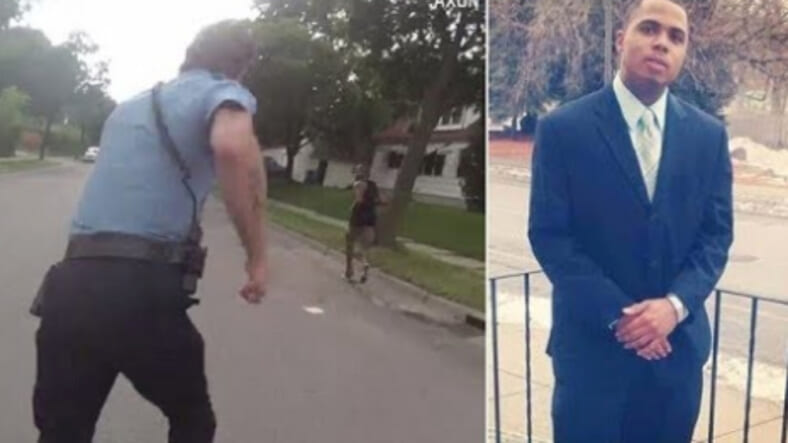 Bodycam footage has been released showing the moment Minneapolis cops shot 31-year-old Thurman Blevins from behind, sparking outrage in the city and setting off protests and a police probe into the use of deadly force.

On June 23, officers Justin Schmidt and Ryan Kelly, who have both been placed on administrative leave, are seen on the video responding to a 911 call which led them to Blevins who was sitting on a curb near a woman with a baby stroller.

The officers rolled up to Blevins in their cruiser and contend that he was in possession of a firearms that could be visibly seen in his hand. One officer yells: “He’s got a gun!”  As Blevins proceeds to dash from the scene and the officers follow in a hectic foot pursuit.

“Stop, stop! Put your hands up! I will (expletive) shoot you!” one officer yells.

Blevins yells back, “I didn’t do nothing bro,” “Please don’t shoot” and “Leave me alone.”

A red circle is drawn around Blevins hand in the video to show what appears to be a gun in his hand, the Daily Mail reports.

The officers shoot Blevins and an autopsy reveals that he was shot multiple times by both officers.

But family members argue that Blevins who pleaded not to be shot was not a threat to officers.

—‘We are disgusted’: New Orleans Mayor calls for end to violence after shooting leaves 3 dead, 7 injured—

“He didn’t deserve to die,” said Sydnee Brown, Blevins’ cousin. “He wasn’t a threat when (the officers) approached him. They didn’t view him as a human being,” she told the Star Tribune.

The shooting death of Blevins sparked protests by community activists and his family, which resulted in the body camera footage being released.