Ben Cory Jones and Amy Aniobi on how they plan to represent the LGBTQ community on season 3 of the hit HBO show. 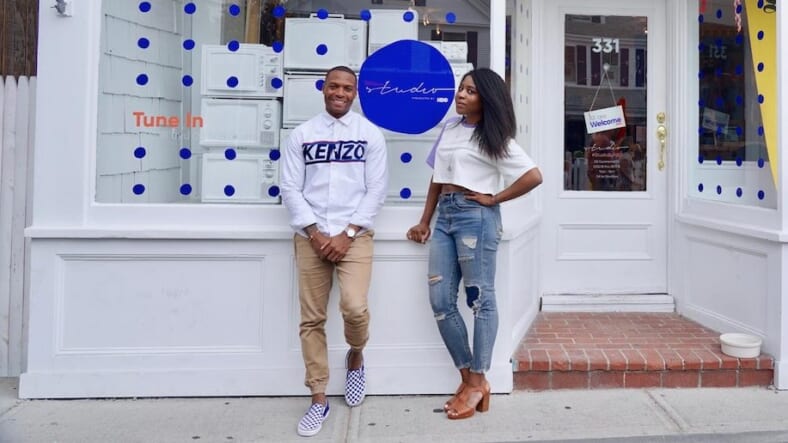 HBO is making good on its commitment  to reaching multicultural audiences with their immersive pop-up experience, The Studio, in Provincetown and this week they hosted Insecure writers Ben Cory Jones and Amy Aniobi.

The duo invited fans to an in-depth conversation about the upcoming season and the state of race and LGBTQ representation in the industry and how they are ensuring that the writer’s rooms and production teams are inclusive and diverse.

We caught up with Jones and Aniobi to find out how they expanded representations of the LGBTQ community on season 3 of their hit show.

“Issa [Rae] as a storyteller, as a producer, as an actress, she always wants to make sure the show has representation for everybody. She has an agenda that the LGBTQ, specifically gay men and trans men and women are represented on the show. We talk about that a lot in the writer’s room. It’s important for black audiences to see black people in different ways,” says Jones.

“I don’t think there was much thought given to how we make this digestible but Insecure is a show that exists today and is set right now and it would have felt false for us to do a show where there were not main characters who were part of the LGBTQ community. Insecure is a slice of life show at a moment in time where we want our world to feel authentic and real and we have to make the show look like the real world.”

Even though the heart of the show will always be centered on Issa and Molly, writers are constantly trying to expand the world around those characters. The diverse crew of creators who work on the series help inform the ever-evolving environments explored.

“Issa and Molly are always going to be the central people on the show but we are really embracing what it means to be representative in every sense of the word. Issa’s brother is openly gay on the show and we are going to explore that more. Behind the scenes, I have never been on a set with so many women, so many people of color, and so many people who feel comfortable discussing their own sexuality as it pertains to the show. It has to come from every level not just on camera, but behind the scenes,” notes Aniobi.

“The best shows on TV right now are made with their core audience in mind. We love that it strikes a chord with the people we are speaking to. These are things we want to communicate with our fans and say, ‘we see that you guys see us.’ It matters more than ratings, awards, the fact that we connect with the exact audience we intended to reach. We all know a Lawrence or an Issa and all have a best friend that can’t learn. All these things are universal so people get in their feelings and that excites us.”

Insecure returns to HBO for season 3 on August 12.