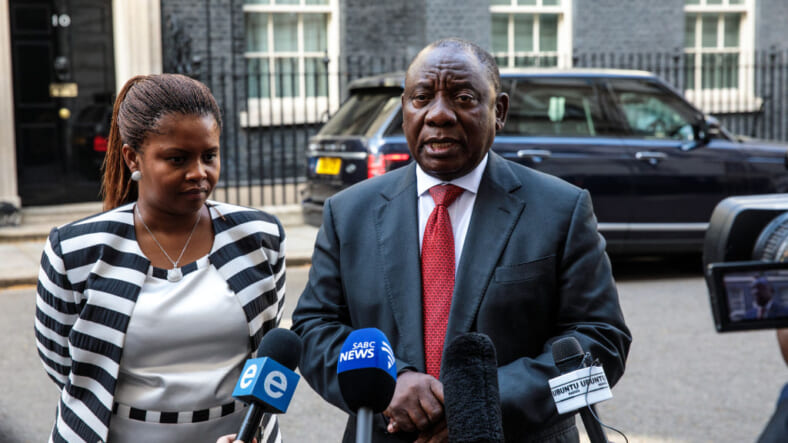 LONDON, ENGLAND – APRIL 17: South Africa President Cyril Ramaphosa (C) speaks to the media in Downing Street following a meeting with British Prime Minister Theresa May on April 17, 2018 in London, England. The UK this week hosts heads of state and government from the Commonwealth nations.(Photo by Jack Taylor/Getty Images)

Ramaphosa addressed South Africa’s parliament in Cape Town in February stating that the “original sin” of the country was the European colonizers taking land from the tribal people in the 1600s. The South African parliament passed a motion to take back the land.

“The expropriation of land without compensation is envisaged as one of the measures that we will use to accelerate redistribution of land to black South Africans,” Ramaphosa said at the time.

He went on to promise, “We will handle it in a way that is not going to damage our economy.”

Ramaphosa said on Tuesday that the controversial reforms was “of critical importance” to the economy.

“It has become pertinently clear that our people want the constitution to be more explicit about expropriation of land without compensation as demonstrated in the public hearings,” Ramaphosa said in a recorded address to the nation according to the BBC.com.

“The ANC will through the parliamentary process finalize the proposed amendment to the constitution that outlines more clearly the conditions under which expropriation of land without compensation can be affected.”

There has reportedly been a growing anger about the slow pace of land reform in South Africa. According to multiple reports, the country’s white minority has a disproportionate hold over land, especially the most fertile lands. Critics fear expropriation could lead to land grabs.

However, Ramaphosa said it had become “patently clear” that the people want the constitution to be “more explicit” on the matter.

“We call on all South Africans to work with us on developing a social compact for economic inclusion, economic growth and jobs for all,” Cyril Ramaphosa said, according to the BBC.

Around 10% of land in white ownership has been transferred to black owners since the end of apartheid, which is only a third of the ANC’s target.

As noted by Reuters, many investors are concerned that the ANC’s reforms could be detrimental to the economy. Ramaphosa has insists that any changes will not compromise food security or economic growth.