Did Chicago police bait people to steal Louboutins and Nike sneakers? You decide. 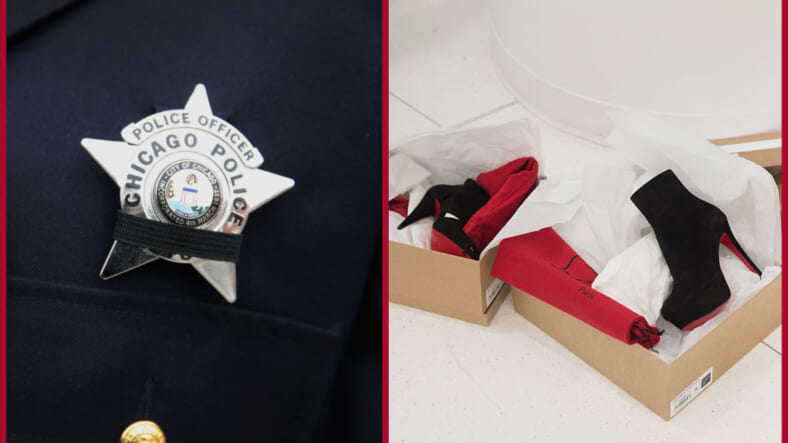 A partly open truck loaded with Nike Air Force 1 sneakers and Christian Louboutin shoes have activists in Chicago asking, are the police trying to set up Black folks in Englewood ? (Photo by Scott Olson/Getty Images) and (Photo by Mat Hayward/Getty Images for Nordstrom)

Community members in Chicago are outraged after its been alleged that police left a truck filled with pricey Nike Air Force 1 sneakers open in an effort to lure would-be thieves with a “bait truck” in a low-income, predominately Black area, Vox reports.

The truck is not only said to have the fancy footwear inside but also Christian Louboutin “red bottom” shoes that are highly sought after by rappers and other celebrities.

Activists confronted officers who were posted up around a basketball court on the west side of the city in a black neighborhood and took them to task about parking the bait truck in the hood with the goal of entrapping poor kids.

Charles Mckenzie of the crime prevention group God’s Gorillas made a video, which has gone viral and received about a half million views.

“Yall see kids playing ball and y’all park a f*cking empty Nike truck, with Nike boxes in there in the ghetto! In the ghetto!” he yells.

Martin G. Johnson, another Chicago based activist who calls himself a “crime chaser”, showed a bait truck in another location in a poor neighborhood in an effort to “set-up” residents to steal and arrest them.

“There were a lot of young guys playing basketball,” said Mckenzie. “Why would they do that in the poorest communities to people who don’t have anything better?”

Law enforcement for years has used bait tactics to lure would-be thieves. Big cities like Chicago as well as Philadelphia have set up bait cars as a deterrent to cut down on crime in high-crime neighborhoods.

The issue with bait cars is that the poorest citizens in America’s most impoverished communities are targeted – like in Chicago.

And given that Chicago has its own set of policing issues that could be better served by police tending to them, the bait trucks placed in poor neighborhoods seem to miss the mark.

This past weekend more than three dozen people — including an 11-year-old — were shot Saturday night in Chicago, authorities confirmed, and at least five of those victims have died.

Check out the video. Grio fam, do you think they were set up?