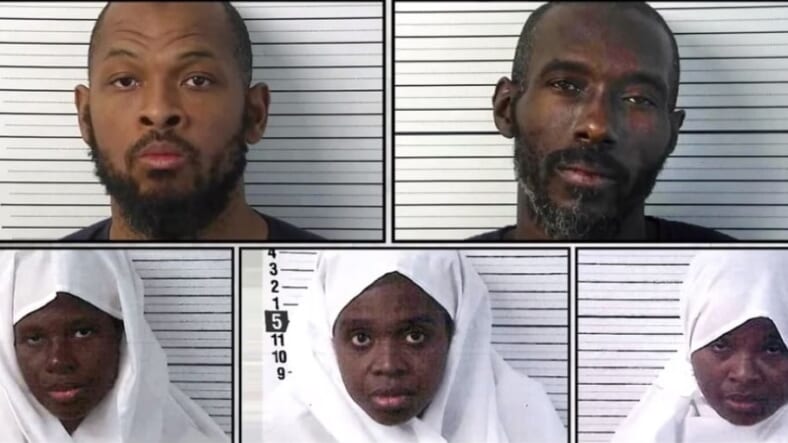 Siraj Ibn Wahhaj is one of many arrested at a New Mexico compound.

Police arrested the father of a missing Georgia toddler after discovering him in a shabby compound in New Mexico with 11 unkempt and starved children along with the remains of a boy they believe to be his dead son, NBC News reports.

In a bizarre twist, police believe Siraj Ibn Wahhaj, 40, the father of the missing 4-year-old boy Abdul-ghani, was also training a child at the makeshift compound to become a school shooter, court documents filed in 8th District Court in Taos County alleged Wednesday.

A foster parent of one of the children said that Wahhaj “had trained the [foster parent’s] child in the use of an assault rifle in preparation for future school shootings,” according to the document.

Police raided the compound looking for the missing boy who was three at the time and had gone missing in Jonesboro Georgia after his father took him out to a park and never returned, his mother said.

The day the unidentified remains were found, happened to be the boy’s fourth birthday. Wahhaj was a prime suspect, according to reports.

Police not only found Wahhaj in the compound but four adults and 11 children were found ranging in age from 1 to 15. Wahhaj’s son was not located.

Multiple firearms were found on the scene as well.

The adults were charged with 11 counts of child abuse. Wahhaj charged with interfering with a parent’s custodial rights, as well as other charges. Lucas Morton, 40, was also charged with harboring a fugitive.

In addition, a tactical unit was sent to the compound because of what police called individuals “heavily armed and considered extremist of the Muslim belief,” said Taos County Sheriff Jerry Hogrefe.

Wahhaj’s son Abdul-ghani had seizures and a birth defect called hypoxic-ischemic encephalopathy, which causes a lack of oxygen and blood flow, and he couldn’t walk, the warrant said.

Wahhaj left with his son in December and the boy’s mother told police that Wahhaj wanted to perform an exorcism on him because he thought the boy was possessed by the devil.

According to an extradition warrant, Wahhaj took the Absul-ghani to a park and never returned, the woman said.

Jason and Tanya Badger who live next to the makeshift compound said they tried to no avail to get the group removed from the premises and had growing concerns about them encroaching on their land. A judge ultimately dismissed an eviction notice in June, according to court records.

Tanya Badger said now its blood on their hands.

“We saw him here alive and now he’s not, and we have to live with that,” Badger said about the boy.

Jason Badger added: “Something should have been done sooner. It’s downright pathetic.”

Sheriff Jerry Hogrefe said they didn’t have enough solid evidence to move in at the time the Badgers made their report.