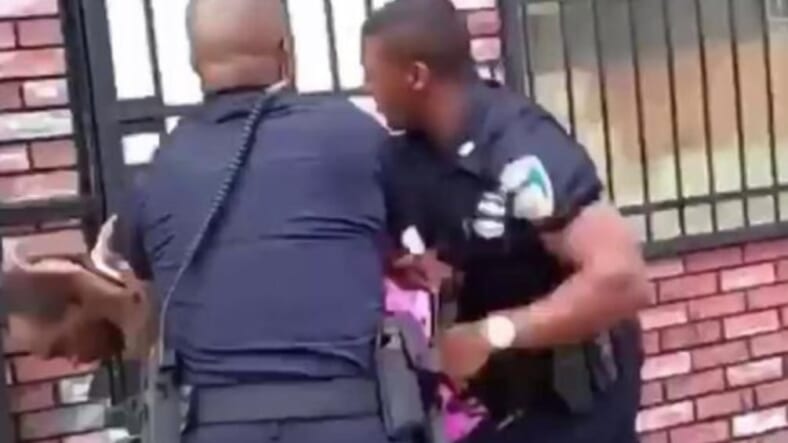 Baltimore Police are investigating one of their own after a viral video showed an officer punching a man repeatedly, on Saturday. (screenshot via Twitter)

The rogue police officer caught on video brutally beating down a Baltimore man until he was bloody, has resigned from his job.

Interim Police Commissioner Gary Tuggle announced on Twitter Sunday that the unnamed police officer stepped down and he has accepted the officer’s resignation. He confirmed that an “active criminal investigation” continues into the brutal beating of 26-year-old Dashawn McGrier.

The incident occurred outside of Q’s Bar and Liquors in East Baltimore on Saturday, the Baltimore Sun reports. A bystander recorded the brutal assault and uploaded the clip to social media.

The victim, McGrier, was reportedly stopped by the officer, identified by his attorney as Arthur Williams, and an argument ensued after Williams initially let McGrier go before coming back and demanding to see identification.

“When he was asked for his identification, the situation escalated when he refused,” the police department said. “The police officer then struck the man several times.”

McGrier can be seen in the graphic video bleeding profusely on the ground. Williams’ unnamed partner—who was placed on administrative duty—seemed to only offer a half-hearted attempt to stop the assault.

This Baltimore Police Officer needs to be fired immediately & charged w/ assault. Laws regarding assault still apply to police. This isn’t MMA. Completely shameful. None of that was necessary.

We aren’t asking the city to suspend this man. He needs to be terminated and charged. pic.twitter.com/fCNdEcU2JO

McGrier reportedly suffered fractures of the nose and jaw and ribs from the beating.

The Baltimore State’s Attorney’s Office is also reviewing the case.

Mayor Catherine Pugh weighed in and said the incident was “disturbing.” And she “demanded answers and accountability.”

“We are working day and night to bring about a new era of community-based, Constitutional policing and will not be deterred by this or any other instance that threatens our efforts to re-establish the trust of all citizens in the Baltimore Police Department,” the mayor said.

According to the Baltimore Sun, the city entered into a federal consent decree in 2017 after the U.S. Justice Department found officers routinely violated people’s constitutional rights.