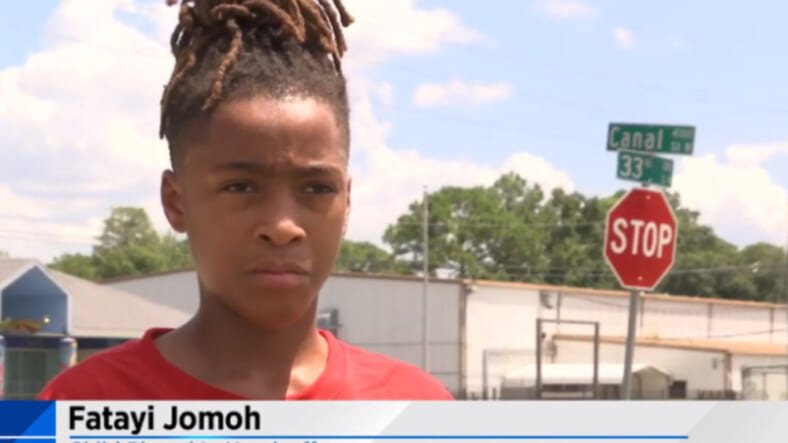 A Florida mother thought she was doing the right thing by allowing her son to play basketball in a local police athletic league but after her 11-year-old son wound up in handcuffs she’s rethinking the decision.

Bunmi Borisade said her son was bouncing a basketball last week when a police officer tried to scare her son straight by putting him in handcuffs for refusing to stop dribbling, according to News4Jax.

To add insult to injury, the Jacksonville mom said she and her son had just finished attending a JaxPAL game, which is the city’s Police Athletic League, which sponsors a youth basketball league.

“A little girl came up to me and said, ‘Hey, excuse me. Your son is being arrested for dribbling a basketball.’ I said, ‘You can’t be serious,’” Borisade said.

But one callous cop placed Borisade’s 11-year-old honor roll student Fatayi Jomohin handcuffs because the boy wouldn’t adhere to his command to stop bouncing the basketball.

Shocked, she approached the policer officer to ask why he handcuffed her son. Borisade said the cop claimed her kid was being disrespectful for refusing to refrain from bouncing the ball. Still Borisade said it was no reason to make her child feel like a criminal.

“The officer who handcuffed my son looked at me and said, ‘He was being disrespectful,’” Borisade said. “I said, ‘Well, why didn’t you come and tell me? I’m his mom.’”

Borisade has taken the issue up with the Jacksonville Sheriff’s Office. Borisade filed a complaint which is under review by the Internal Affairs department.

Ironically the mission of PAL is reportedly to create “positive relationships between law enforcement officers and the youth of our community through educational, athletic and leadership programs,” but this incident fell short of that mission.

Borisade said the incident left her son afraid of police.