Who is Ja’Ron?: 3 things to know about the Black man in the White House

Kellyanne Conway, counselor to Donald Trump, named him as the administration's most senior Black aide after Omarosa's firing. 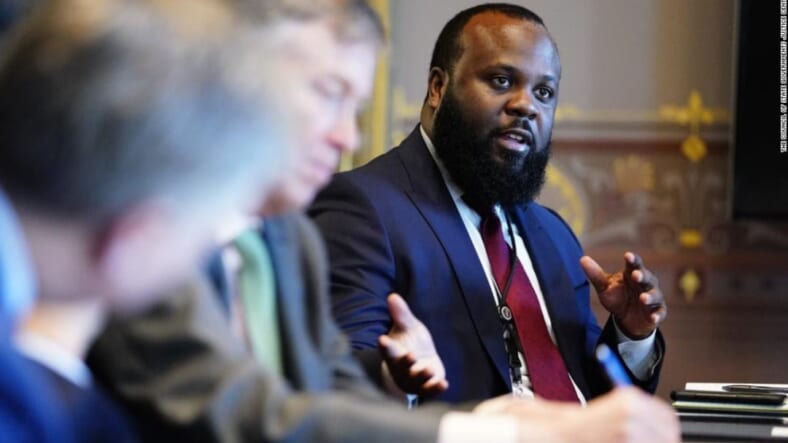 A National Business Roundtable, with Ja’Ron Smith, Special Assistant to the President on Domestic Policy. (Courtesy of the Council of State Governments)

In case you haven’t heard, Ja’Ron Smith, special assistant to the President for Domestic Policy, is now the most senior Black aide on Trump’s staff.

The news comes after Omarosa Manigault Newman‘s recent claims that she heard a tape of Donald Trump using the n-word, calling attention to a paucity high-level Black staffers in the White House.

Here are three things to know about the staffer who has been a presence at Trump’s meeting with inner-city pastors and other critical gatherings:

Today’s Kellyanne Conway fiasco on TV today underscores a truth that Ja’Ron Smith’s friends have been trying to get him to leave the Trump administration for months.

1. When the administration hired Smith last year to serve as an advisor to Trump on Urban Affairs and Revitalization, many people felt he was selling out on the community he should have been helping, one anonymous source told CNN. Among the issues assigned to Smith are prison reform and Historically Black Colleges and Universities.

“There were a lot of people who were upset that he joined the administration because they felt that he had turned his back on the community that he said he wanted to help,” a Republican with ties to the White House told CNN.

Another source told CNN that Smith was aware that by taking the job, he could be called an “Uncle Tom.”

“He was willing to bear the cross at this point in his life,” the source said. “He sees the bigger picture.”

2.He grew up in a single-parent household in Cleveland and earned an undergraduate degree in finance at Howard University before earning a master’s degree in divinity, also from Howard.

3. He’s had a long career on Capitol Hill extending more than a decade and his resume includes work for prominent Republicans. He was an aide to Vice President Mike Pence back when Pence was a congressman and chair of the Republican Conference. He also was an aide to Sen. Tim Scott, a Black Republican from South Carolina who has evolved as the face of Black GOP thought in Washington.

Scott told CNN that Smith was a “significant member of my team.” He added, “I’m proud to witness his growth throughout his career in Washington.”