See what stars like Cardi B, Nicki Minaj, and SZA, wore to the big event. 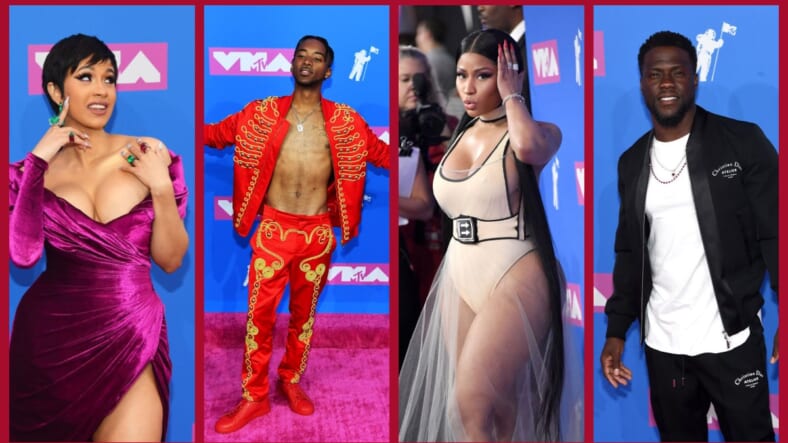 The 2018 MTV VMAs are finally upon us and we’re running down the list of the most stylish stars to hit the pink carpet on the wildest award show in music.

Stars like Cardi B, Offset, Nicki Minaj, and more are sure to stun on the carpet this year and we can’t wait to see what surprises are in store from the biggest names in the game.

The night’s leading lady who’s nominated for 10 mom men showed up on the carpet looking super snatched in a velvet gown that hugged her curves just five weeks after giving birth to baby Kulture. She showed off a bold new pixie cut and lots of cleavage and walked the pink carpet sans her husband, Offset.

This couple walked the carpet hand in hand with Karrueche grinning from ear to ear as she posed with her beau.

Model Winnie Harlow who hosted the pre-show showed off some serious skin in a see-through gown that left little to the imagination.

The men of Migos decided to hit the show together and chose very different looks for the night. Perhaps these guys can spend some of their coins on a stylist?

The Love & Hip Hop Miami star and singing sensation donned a bright green gown with a complimentary cape to the show and flaunted her now signature afro.

Sweet sisters, Chloe and Halle have been touring with The Carters all summer and rocked some beautiful gowns with mind-bending patterns.

The actress donned a super short bob with bangs and a leather skirt paired with a floral turtle neck and we’re just wondering how she’s beating the summer heat.

The rapper showed up looking cool and casual in a printed jacket paired with a plain white tee and jeans.

SZA’s fun, fringed frock is a perfect choice for the VMAs festivities and we’re loving her wrap around stilettos and neon nail polish.

The chart-topping artist and producer and judge on The Four hit the VMAs carpet with his wife Nicole Tuck and son, Asahd by his side and they all donned gold-patterned ensembles. Sweet.

This “Crunch Time” rapper caught our eye thanks to her not so subtle nod to Clueless. Points for nostalgia!

Tyga keep his shades on while he posed for photographers with his hairline fully intact. As far as his all-denim ensemble goes, all we can say is: Do better.

The singer wore a long-sleeved, shimmering gown with a super high slit that showed off her thighs and proves Ashanti’s still got it.

Teyana took a break from her newly hijacked KTSE tour to stun on everybody on the red carpet in a ripped tank that showed off her washboard abs.

The comedienne jumped on the see-through gown bandwagon showing off her belly button and an unusual choice in headwear. Tiffany’s hoop earring are nice touch to her racy outfit.

J-Lo is looking classy in a strapless silver gown that will certainly match her moon man when she’s honored with the Michael Jackson Video Vanguard Award.

Blac Chyna showed a little too much of her tattooed bod for our taste but what do we know? Her pink-chain ensembles certainly proves she’s proud of her post-baby bod and she should be.

The Queen rapper showed up in what looks like a designer belted-bathing suit with a sheer overlay that we guess makes it a dress that showed off her every curve.