Delta Sigma Theta pays tribute to their soror, the Queen of Soul 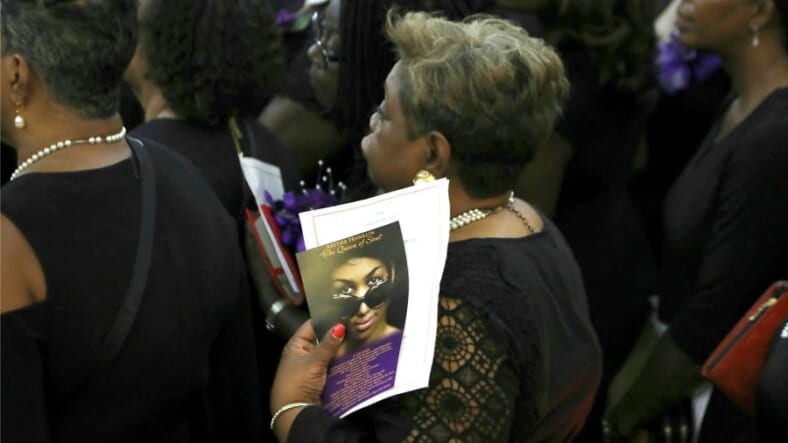 A member of Delta Sigma Theta holds an Aretha Franklin tribute as they pay tribute to Franklin at the Charles H. Wright Museum of African American History, Tuesday, Aug. 28, 2018, in Detroit. The sorority’s traditional Omega Omega service lasted nearly an hour. Franklin, who was inducted into Delta Sigma Theta as an honorary member in 1992, was remembered as for her regal presence and love of her community. (AP Photo/Carlos Osorio)

DETROIT (AP) — What began as a thin line swelled into a sea of sisterhood as hundreds of members of Delta Sigma Theta streamed into the rotunda of the Charles H. Wright Museum on Tuesday to pay tribute to the Queen of Soul, a member of the sorority.

The moving ceremony, known as the Omega Omega Service, was the latest testament to the life and legacy of Aretha Franklin, who was remembered by her sisters as a proud black woman who demanded respect and loved her community.

“She loved Delta and its ideals … she looked for the best in others. Her life was an inspiration,” said U.S. House Rep. Brenda Lawrence, a member of the sorority who was elected the first black mayor of Southfield, Michigan, in 2001.

At least 1,000 Delta Sigma Thetas from across the country attended the service, which lasted nearly an hour and is traditionally performed for any member before her funeral. Standing in a semicircle surrounding Franklin’s family, the women filed in for nearly 10 minutes wearing black dresses, pearl necklaces, and corsages of African violets, the sorority’s official flower.

The traditional service saluted Franklin with words, scripture and songs.

Particularly emotional was the singing of the Delta Prayer, which filled the rotunda as Franklin’s sisters serenaded her in unison.

Franklin was inducted as an honorary member of Delta Sigma Theta in 1992. The sorority is among the cultural institutions she loved, including the black church and historically black colleges.

“She was a true, strong Delta and embodied who we are through the songs she sang, through the way she conducted herself and through the boldness she took in terms of social justice,” Smith said in an interview after the service. ”

On the first day of her public viewing ahead of her funeral services on Friday, Franklin was resplendent in her sorority’s signature crimson. She wore the color from head to toe, including red Christian Louboutin stiletto heels, red lipstick and red nail polish.

Thousands of mourners poured into the museum to pay their final respects to Franklin, who died Aug. 16 of pancreatic cancer at the age of 76. The two-day viewing was part of a week of commemorations for the legend.

At the end of the Delta Sigma Theta ceremony, Franklin’s sorors filed past her polished bronze casket to say goodbye in a final act of sisterhood. Smith said that women came from across the country to show their respect and solidarity.

Whack is The Associated Press’ national writer on race and ethnicity. Follow her work on Twitter at http://www.twitter.com/emarvelous .