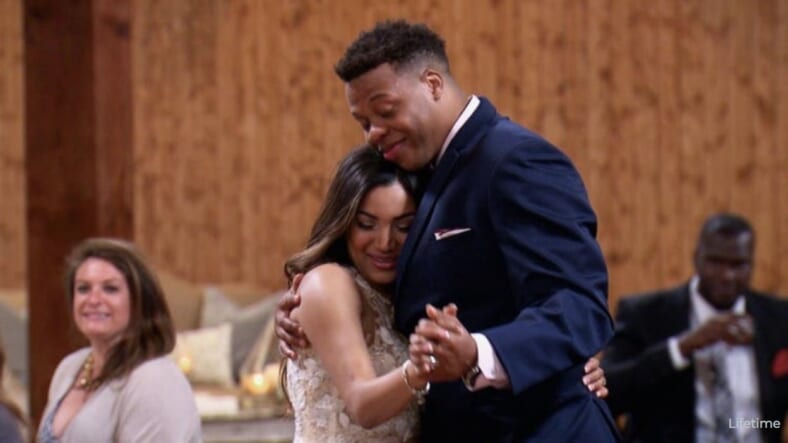 Mia Bally and Tristan Thompson — not that Tristan Thompson – who wed on Lifetime’s Married at First Sight are divorcing while the show is still airing. According to People Magazine, Bally filed for divorce in Dallas County, Texas on Sept. 4.

Bally, an airline recruiter, and Thompson, who owns tutoring franchises, got married on the on the show this summer. It was probably not a good sign when Bally was detained at the airport as she and Thompson were leaving for their honeymoon.

The premise of the show is that a group of experts in relationships, spirituality and psychology find a large test group of marriage-minded singles and then choose three men and three women to get married.

But apparently Bally had previously been charged with stalking and unauthorized use of a credit card involving an ex-boyfriend. Thompson, on a show about marrying a woman you’ve never met, seemed overwhelmed by this new information.

“I know that sh-t can get fabricated when it comes to exes and things like that nature,” Thompson said to People. “I get it, but that doesn’t stop the fact that I have to live with this sh-t right now. All of this is piling up, and now I’m sitting here not knowing who I just married.”

At the time, a Married at First Sight rep told the magazine: “On this season of Married at First Sight, one of this season’s participants — Mia — was detained at the airport by authorities as she was about to leave on her honeymoon with her new husband, Tristan. The warrant for Mia’s arrest was filed after her background check had been cleared by production.”

“This entire marriage I feel like I’ve been completely honest with Mia, and I’ve told her to just give me the truth, and it seems like she’s gone out of her way to hide things from me,” he says in a clip. “I honestly don’t know what to feel or what to believe right now. I thought we were done with all the secrets and lies.”

Thompson sparked his own controversy when the show premiered. The 29-year-old groom put his foot in his mouth said that he would only marry a woman of a lighter complexion, specifically someone lighter than his butterscotch coloring, because darker women just don’t do it for him.

“I really don’t prefer women that are darker than me,” he said. “When it comes to marriage you’ve gotta be with someone that melts your butter.”

He also repeated made fat-shaming jokes saying his woman better not be “a biscuit off 350” pounds.

Ultimately, Mia, a woman of Indian-Trinidadian and Jamaican heritage with fair skin who was of average weight with silky straight hair was selected to be Thompson’s bride.

Guess that skin color fetish wasn’t enough to keep the pair together.