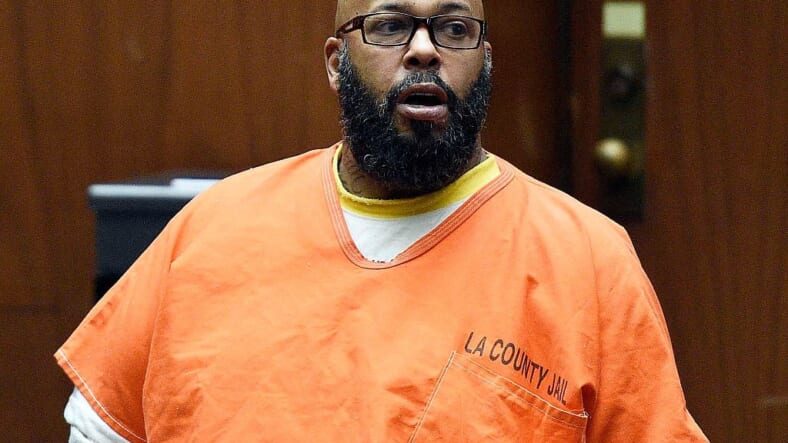 Suge Knight is heading to prison for a very long time.

The former Death Row Records head whose legal name is Marion Knight, was sentenced to 28 years in state prison on Thursday. The 53-year-old reached a plea deal in the incident that left one man dead (Terry Carter)  and another seriously injured (Cle “Bone” Sloan) on January 29, 2015.

The incident occurred following an argument on the set of a commercial for the film, Straight Outta Compton.

Knight was arrested in 2015 and charged with murder, attempted murder and hit-and-run and has since had 16 different appointed attorneys represent him. According to reports, his attorney contacted the district attorney’s office on Wednesday to discuss the plea deal, just days before the jury was to be selected for the trial set for October 1.

Prior to the plea deal, Suge Knight was facing life in prison with no possibility of parole.

“I’m surprised he pleaded out. Normally he likes the cameras to be on him 24/7,” grieving daughter Crystal Carter said outside court, according to the Associated Press.

The plea deal concludes a case that has been dragged out for years and was rife with drama, from health scares, violations, and threats against Straight Outta Compton director, Gary Gray.

When director Gary Gray was standing on an L.A. street filming “Straight Outta Compton” he got a call from an irate Suge Knight. According to detectives. Knight was mad about the way he was being depicted in the film and that he was not getting paid.

The phone call ended when Gray hung up on Knight. There were two other phone calls but Gray ignored them both. That’s when he got the text message.

“I will see u in person … u have kids just like me so let’s play hardball,” Knight, 52, wrote, before signing off with a couple of expletives and a racial slur.

Gray was terrified and it appears he still is. According to court transcripts, he repeatedly claimed on the stand that he couldn’t remember anything about the messages. At one point in his testimony, he seemed to have trouble recalling details of the film even though he directed it and it was nominated for an Academy Award.

Deputy District Attorney Cynthia Barnes told the grand jury that the director’s testimony showed just how much fear Suge Knight was able to instill in people.

“He’s so afraid he came in here and lied under oath,” Barnes stated. “He’s perjuring himself because he’s that afraid.”