World’s most expensive shoes at $17 million go on sale 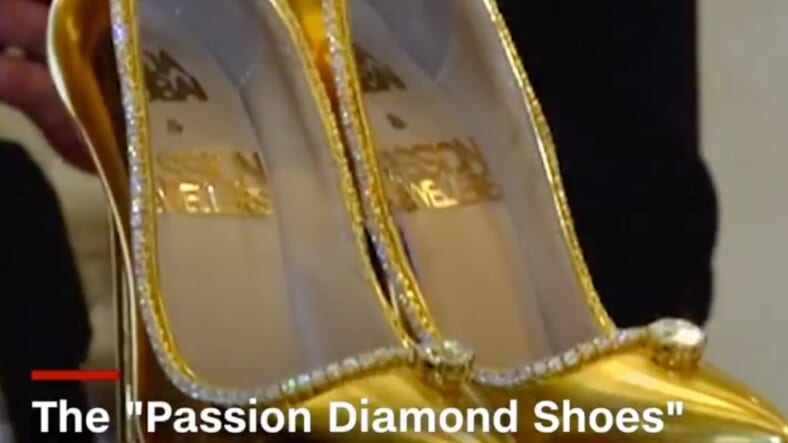 How about upwards of $17 million for a pair of shiny sparklers in Dubai.

And yes, you read that right.

The Passion Diamond Shoes, a pair of diamond-encrusted, gold, leather and silk stilettos designed by Maria Majari of Jada Dubai, in collaboration with Passion Jewellers, are on display in the Burj Al Arab Hotel in Dubai, along with two other expensive shoes that incorporate rubies, pearls and other fine jewelry in the design, according to CNN.

Called “The Passion Diamond Shoes”, these gold and diamond-encrusted stilettos are believed to be the world’s most expensive shoes at $17 million https://t.co/bKEot4QaN0 pic.twitter.com/ATmfFqpWMS

Technically, only a prototype of the shoes currently exists. Manufacturers unveiled the design to a group of 50 prospective buyers at Dubai’s Burj Al Arab hotel, according to The Sydney Morning Herald, which reported the shoes costing a whopping $23.6 million. Only one pair of the shoes will be custom created to fit the wearer’s feet.

The Passion Diamond Shoes feature two quality and flawless 15-carat D diamonds on the toe “that are the rarest,” as well as “236 smaller diamonds,” which are also flawless D, according to Majari.

Majari, who studied fashion in Dubai and London, said she created the shoes with Passion Jewelers after she noticed there were no ultra-high end shoes currently on the market, according to The Star Online.

Hemant Karamchandani, CEO of Passion Jewellers, said Dubai is a wonderful market for ultra-high end shoes. “You can see some potential buyers here,” he told Star TV. “Dubai is a city of millionaires and billionaires so you know we can see it as a potential market.

So where would you wear such an expensive pair of shoes, you might ask. You could try the world’s most expensive house, for starters, before dashing out in them in one of the world’s richest cities.