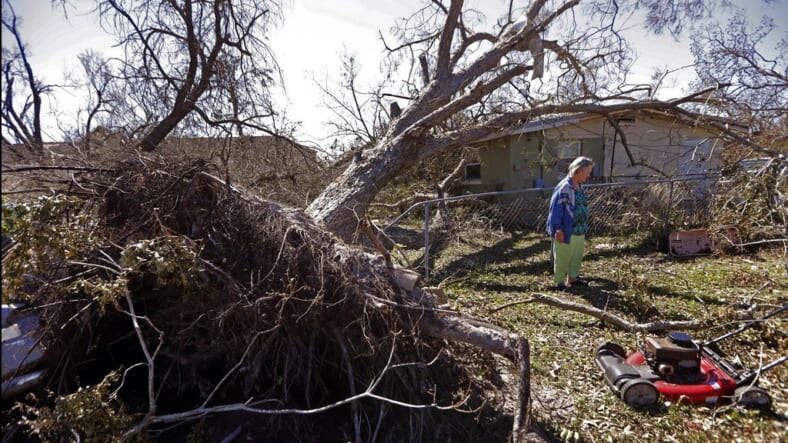 Mary Frances Parrish shows her toppled pecan tree, which fell in a neighbor’s house, in the aftermath of Hurricane Michael in Panama City, Fla., Saturday, Oct. 13, 2018. Parrish didn’t leave the storm because her car was broken down, she didn’t have a place to go and if she did she didn’t have the money for it. She is caring for her terminally ill son who lives with her. (AP Photo/Gerald Herbert)

By BRENDAN FARRINGTON, Associated Press
LYNN HAVEN, Fla. (AP) — Mary Frances Parrish is expecting to be without electricity for several weeks, or roughly the same time the terminally ill son she’s caring for is expected to live.

In the days after Hurricane Michael smashed through her neighborhood, leaving many of her neighbors’ homes destroyed, she and her son Derrell, 47, were planning to stay, with or without running water and electricity. The reason is the same she waited out the storm in the tiny house: She doesn’t have a running car and she doesn’t know where she would go.

“I didn’t have a way of getting away from here. My car’s under repair and there’s nowhere to go or the money to pay for a place,” the 72-year-old Parrish said. “People are sending stuff in. I’ve got plenty of water, I’ve got cold drinks, I’ve got plenty to eat. It may be right out of the can, but it’s plenty to eat. As long as you can have plenty to eat and drink and stay in good spirits, you’ll make it.”

Parrish, whose son has cancer, is in a position many in the Panama City region are facing. They have damaged homes, no power, and don’t have the resources to relocate, either to a new home or a temporary home. While others with more means have gobbled up hotel rooms in Destin 45 miles to the west, there are many who now no longer have a job and are forced to stay in damaged homes.

Around the corner from Parrish, Nanya Thompson, 68, was hanging clothes to dry from the power lines that were now dangling a couple of feet off the ground directly in front of her apartment door. All but two of the windows of the small home were blown out during the storm, and part of the roof came off, blowing water and insulation into it.

She was a hotel worker, but the hotel she worked at was damaged during the storm and now her job is gone. The owner allowed her to stay at the hotel until authorities said it wasn’t safe for people to be there.

So for now, she’s staying put.

“I’m planning on staying until someone comes to go to the door and tells me to go,” she said, adding she’s waiting for her social security check at the end of the month to help keep her going. “At my age it will be hard for me to get another job. I may not hold out here. I may just have to leave.”

Further south in Panama City, Clinton Moseley, 55, was cleaning limbs and debris from the house he shares with his 81-year-old mother, Rebecca. An enormous tree crashed through the roof above one of the bedrooms of the house that’s been in his family for a century. Water gushed in, but he said they’re staying.

Moseley, who lost his right leg below the knee in a car accident, was sweaty and tired as he tried to clean up. But he doesn’t have a job and he said he and his mother are staying in the house in a particularly hard-hit neighborhood.

A few streets down, Gay Little, 72, returned to her home to gather her belongings with the help of her daughter-in-law. She stayed with her son and his family during the storm further north in Bay County, but came back to find her home unlivable. Before the storm, she had decorated her yard with a lively Christmas in October display. Now ornaments and plastic Santas were blown into surrounding yards while figurines were scattered around her home.

Little lives alone in the house. She has insurance, but she doesn’t have cell phone service to get ahold of her insurance company. She’s disabled and her only income is Social Security.

“I don’t have anybody but me, and I’ve lost everything I’ve had,” Little said. “I get enough just to pay my bills. I have $3 a month leftover.”

But she, unlike some others, has a place to stay. She doesn’t have enough savings to replace the home she’s lost and is hoping insurance covers it, but she’s bracing for a long wait. In the meantime, she’s with family.

“We’re lucky that we at least have a place to stay,” said her daughter-in-law, Pam Rudd, 50. “There are people walking up and down the road with backpacks and no place to go.”