These are the faces of the new young black conservative movement.

WASHINGTON, DC – OCTOBER 26: Young black conservative leaders from across the country take photos in the East Room of the White House as President Donald Trump speaks on the state of the growing economy as part of the 2018 Young Black Leadership Summit at White House on October 26, 2018 in Washington, DC. (Photo by Pete Marovich/Getty Images)

(Washington, D.C.) — The East Room of the White House was packed once media was finally allowed inside. Cramped behind a small rope in the back corner of the room, reporters struggled to get photos and audio recordings over the electrified crowd.

There were a sea of black faces with red hats.  And they were there to see President Donald Trump.

The 2018 Young Black Leadership Summit was sponsored by Turning Point USA, a conservative organization which says it’s focused on identifying, empowering and organizing young Americans to take their spot in the national limelight.

“Vote for me! What do you have to lose?” Trump declared to the crowd, garnering wild cheers.

WASHINGTON, DC – OCTOBER 26: (AFP OUT) U.S. President Donald Trump addresses young black conservative leaders from across the country as part of the 2018 Young Black Leadership Summit in the East Room of the White House on October 26, 2018 in Washington, DC. (Photo by Chris Kleponis – Pool/Getty Images)

But right before the president addressed the gathering of young black conservatives from across the country, a debate had broken out between journalist Roland Martin and a few of President Trump’s supporters.

The dispute began with Joel Patrick asking Martin about the “murdering of black babies” and accusing him of shifting the conversation, since he wasn’t “prepared” to talk about the truth which “is typical of the left.” 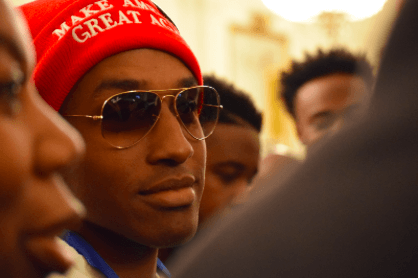 “People assume that because you value conservative ideas that you hate yourself and that you hate black culture and that you hate everything that has to do with diversity, when the truth of the matter is we want all of those things even more.  That’s why we want to see them realized in a way that the Democratic party hasn’t been able to realize them for African Americans,” Patrick told theGrio.

With his aviator sunglasses tucked into his clean black suit, another conservative by the name of Uber Guy Jimmy Jay articulated the struggles he faces for his beliefs.

“What I go through- I get called a coon, Uncle Tom, they say I have [my] black card taken from me, I have friends that I lost, I have family members I don’t have the same relationship with. And the reason being is because, it’s sad to say it, but the transition from Obama to Trump, it made it too hard for them because they loved Obama so much and he couldn’t do anything wrong, [there] wasn’t anything objective about it or anything,” Jay told theGrio. “Now I feel a lot more free, living my truths.”

He elaborated on the idea of “race sells,” a concept heard often throughout the summit, but concluded with a hopeful attitude. “I’m Trump 2020 until he makes a mistake and he ain’t been making no mistakes like that,” Jimmy Jay said with a smile. 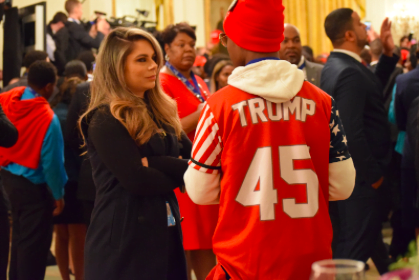 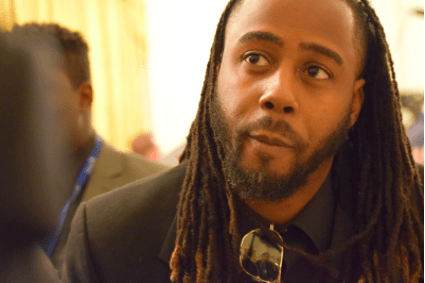 Justice Peace’s TPUSA lanyard popped against his all-black outfit topped with a woven fedora. After speaking to the crowd gathered outside the White House lawn, Peace spoke about his challenges as a black conservative.

He says he’s received death threats and that “people try to fight me, solely because I voted for Trump.”

Justice told theGrio because of his political views, “I can’t have friends.  If I tell a girl that I voted for Trump… she’ll stop dating me.” 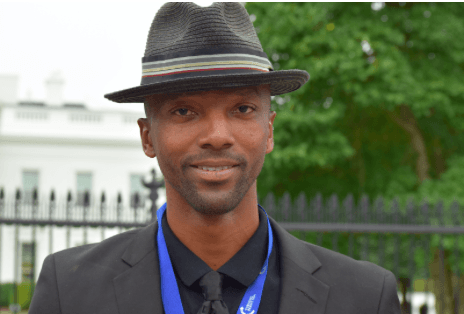 The social consequences have not stopped his professional ambitious however, as he says he is attending law school to change policy.

“I’m kind of anti-political correctness because it strays away from the actual principles behind things and it goes into just purely feeling,” says Peace.  “And if we were to all go based off of feelings then that means all people’s feelings are valid, right? Which would mean Hitler’s feelings are valid. Which means if we go along that line of logic… then if I feel like killing you then I should. So I want to fight that irrational type of way of thinking,” he stated. 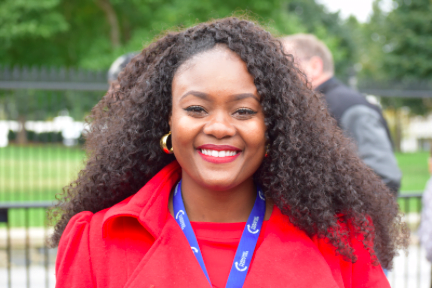 Bevelyn Beatty is a proud Trump support who says she endured public ridicule over her vote. (theGrio/Cassandra Vega)

Bevelyn Beatty was dressed in bright red from head to toe, a look which both fit in with the MAGA hats and stood out amongst the sea of black suits. Her voice echoed across the street when she spoke passionately about why she chose to vote for Trump.

“I got so much ridicule, I was called a disgrace to my people and let me tell you something, it was predominately white people who told me this,” said Beatty. “Now I’m not a racist now, I love my white people, but let’s make something very clear. When you have a white person tell you how to think because you’re black, that is racism!”

“if I tell a girl that I voted for Trump, she won’t, she’ll stop dating me.”

“Malcolm X said it very clear, any African Americans who vote for liberals that have continued to make promises and yet have not done anything and have not kept to their promises, are a chump! And a disgrace to your race,” said Beatty.

“We are not the disgrace! We are not angry black people. We are not people that are stupid. We are not dumb, look at all these educated faces. I came here and I was like wow, all of these black conservatives? So you’re telling me I’m not the only one?” she preached the cheering crowd. 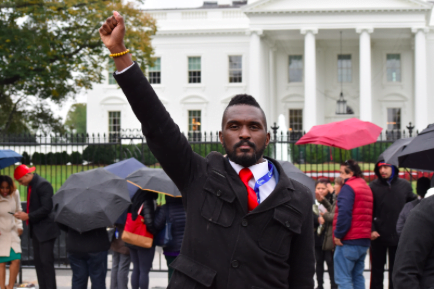 Cordell Erskine used the black power pose to illustrate his connection to all his brothers and sisters, regardless of their political party. (theGrio/Cassandra Vega)

Standing near Bevelyn as she spoke was New Jersey native Cordell Erskine, born to undocumented immigrants. He considers himself to be a fiscal conservative, but a fundamental liberal, citing the PragerU video differentiating the difference between leftists and liberals.

“People assume just because you’re black or a woman that you have a certain opinion,” he pointed out. After he served in the military, Erskine says he went to college and graduated with “no college debt. I don’t have any problems, I can succeed even though I’m black.”

Making opportunities for oneself and ending what they say is separation between African Americans and Americans, seemed to be the focus for most supporters. 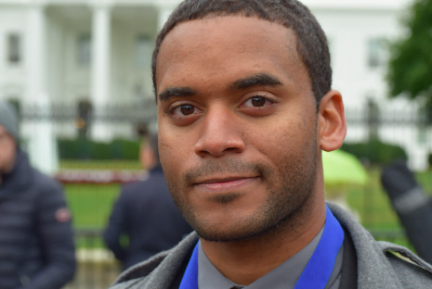 Joe Latham was not as outspoken as some of the others in the crowd. He lacked a MAGA hat and a megaphone, but still was supportive of the current administration.

Latham addressed the fact that he has “come to really respect Trump. … We’re all Americans and he’s trying to do the best he can for you being an American.”

“I’m not out here because I’m a Republican, I don’t identify as a Republican,” Latham said. “I’m a guy with an opinion and I’m seeking the truth.”