Two trick-or-treaters, believed to be young males, were out collecting candy on Halloween wore blackface and Confederate flag capes as their costumes. 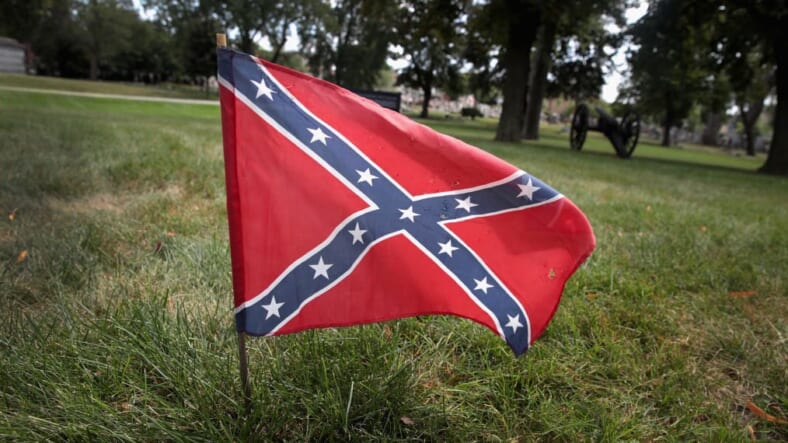 It was no treat for 17-year-old Esperanza Menendez who came face to face with two white males whose faces were painted Black as part of their racist Halloween costume in Lower Macungie Township, Pennsylvania.

“It’s not racist,” voices said from the background about the males who were draped in Confederate flag outfits.

Ralf Menendez, the girl’s father said his daughter was the only one to point out the obvious racism even though there were several adults among them.

“This is my daughter who was the only one surrounded by adults that had the courage to address them,” Ralf wrote on Facebook.

The father of the teen told Lehigh Valley Live, “I have been down that block (on Halloween) and there’s always tons of parents around… Everybody was looking, but nobody was saying anything.”

“I was so enraged when I saw these kids, I never thought I’d see something like that in person honestly. The fact they walked around … dressed like that and they had a bag full of candy and no one said anything, it just makes me so angry.”

“I feel like in today’s day you can’t show fear like that to people who think that stuff is okay,” she told the news outlet. “You need to let them know what’s up or they’re going to keep walking thinking they’re superior and they can just do anything.”

Esperanza said she and her two sisters and a friend were out and about trick-or-treating when she saw the boys. But they didn’t look like any of her classmates at Lehigh Valley Charter High School for the Arts in Bethlehem.

She said, “that kind of stuff is scary… But it still made me feel sick.”

A white 25-year UPS employee was fired last week after she showed up for work in Sharonville, Ohio, dressed as a mammy and sporting blackface with enlarged lips on Halloween.

A co-worker sparked controversy after she shared an image of the woman on Facebook on Halloween, asking in a now-deleted post: “HEYYYY EVERYBODY I JUST WANT YA’LL OPINION ON THIS, SHE’S A WHITE WOMAN AND SHE CAME TO WORK AT UPS IN SHARONVILLE, SHOULD SHE BE FIRED????”

And Idaho teachers were placed on leave after they wore a MAGA border wall Halloween costume.