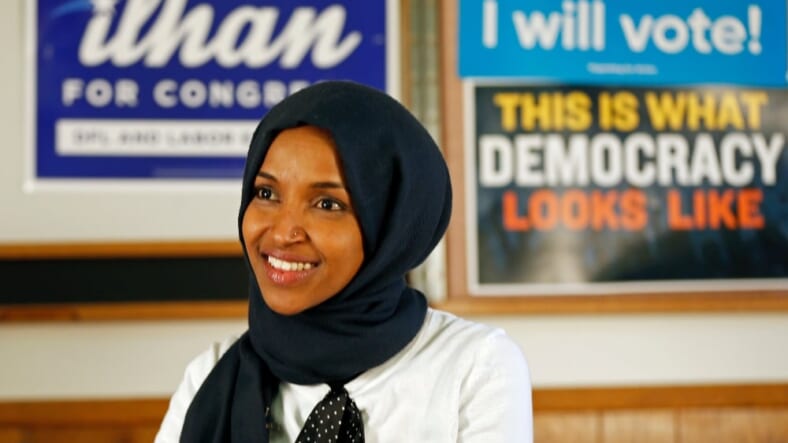 Democrat Ilhan Omar is interviewed by The Associated Press Wednesday, Nov. 7, 2018, in Minneapolis after winning Minnesota's 5th Congressional District race in Tuesday's election. She will be the first Somali American to serve in Congress and one of the first two Muslim women to serve in Congress. (AP Photo/Jim Mone)

Ilhan Omar, a newcomer on the political scene who made history as the first Somali-American to win a congressional seat, appeared on “The View” to discuss her momentous win, Yahoo reports.

The midterm election, she said, proved “clearly… that there is a rejection of politics of fear and divisiveness, that this is a country that really welcomes people and treats them like family, and don’t only just welcome refugees and immigrants, we send them to Washington.”

But she pushed back on Trump, saying that his divisive rhetoric should not be forgotten.

“If they tell you who they are, believe them the first time,” she said.

“This is someone who has cozied up to white nationalists… we should recognize him as what he is and move the conversation beyond him, beyond this divisiveness and to a place of hope, inclusion,” Omar added.

Omar is a Somalian refugee who will become the first Somali-American in Congress in November. With an inclusive message, she defeated four other Democratic candidates in a crowded race to fill the seat that opened up when Rep. Keith Ellison announced his bid to become the state’s attorney general.

She credits her win to “the politics of joy,” and she said her constituents voted with “warm hearts, even though it’s a cold state.”

Omar escaped her war-torn homeland of Somalia as a child and grew up in a Kenyan refugee camp before immigrating to the United States as a preteen. She learned English by watching American television.

Years later, she became the nation’s first and only Somali-American lawmaker when she won a seat in the Minnesota House.

Omar said her message of hope “is that if you work hard and you believe in creating positive change within your community, you can achieve anything.”