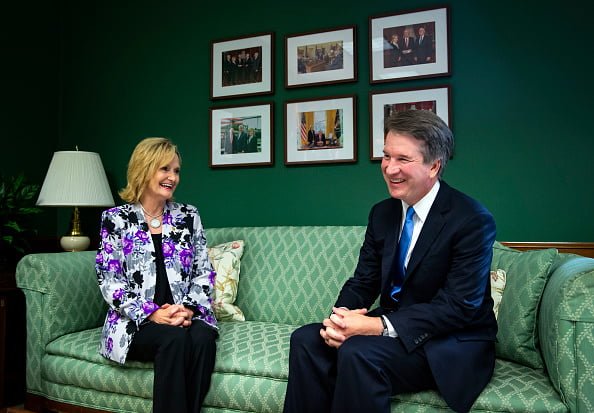 U.S. Senator Cindy Hyde-Smith (R-MS) made a racist joke about lynching that clearly wasn’t funny but apparently, Google doesn’t seem to be bothered and donated $5,000 to her campaign on Tuesday, according to documents filed with the FEC.

The media giant has yet to respond to the donation, especially in light of a racially charged comment made by Hyde-Smith, who said in a video that she’d be “on the front row” if she were invited to “a public hanging.”

Hyde-Smith is a white Republican Mississippi Senator who is currently running an emotionally charged campaign against Democrat Mike Espy, who might just happen to be the first Black U.S. senator from Mississippi since 1883 if he won.

It seems that even in 2018 there are still some politicians who don’t realize public lynchings aren’t the sort of thing you can’t casually joke about to your constituents.

“Cindy Hyde-Smith’s comments are reprehensible,” a statement from Espy’s campaign said in response to the clip. “They have no place in our political discourse, in Mississippi, or our country. We need leaders, not dividers, and her words show that she lacks the understanding and judgement to represent the people of our state.”

Hyde-Smith, who has been endorsed by President Trump also released a statement addressing the video and refused to apologized.

“In a comment on Nov. 2, on accepting an invitation to a speaking engagement,” she told the Jackson Free Press. “In referencing the one who invited me, I used an exaggerated expression of regard, and any attempt to turn this into a negative connotation is ridiculous.”

But given that Mississippi’s unsettling history of having the highest number of lynchings of African-Americans of any state, advocates like Cristen Hemmins, the chair of the Lafayette County Democrats, think her statements were particularly problematic.

“With the history of lynching of Mississippi, you just don’t say something like that,” Hemmins told The Washington Post. “I can’t even imagine the kind of mind that would come up with a throwaway phrase like that. I’m a Mississippian. Nobody I know talks like that. It’s absolutely unacceptable.”

The Clarion Ledger reports that Hyde-Smith and Espy are scheduled to go head to head in a runoff on Nov. 27 since neither candidate was able to get more than 50 percent of the vote during the November 6th midterms.

“The fact that she chooses to use such repugnant language despite the ugly history in her state speaks to her lack of concern and knowledge about the experience of people who don’t look like her.”

On Wednesday, Google issued a statement explaining that the contribution was made on November 2, nine days before Sen. Hype-Smith made her egregious remarks.

“While we support candidates who promote pro-growth policies for business and technology, we do not condone these remarks and would not have made such a contribution had we known about them,” reads the statement.

Google has yet to ask that the donation be returned, nor why they decided to support Hyde-Smith’s campaign in the first place.

In response to the donation, Civil rights group Color of Change has also asked its 1.3 million members to hold Google accountable.

“To ensure Google never funds a candidate like this again, we call on you to immediately and publicly define a clear values path for giving to political candidates,” the organization stated in its statement. “Candidates who in engage in racist and white supremacist language and rhetoric, or support discriminatory policies should never receive financial support from Google.”