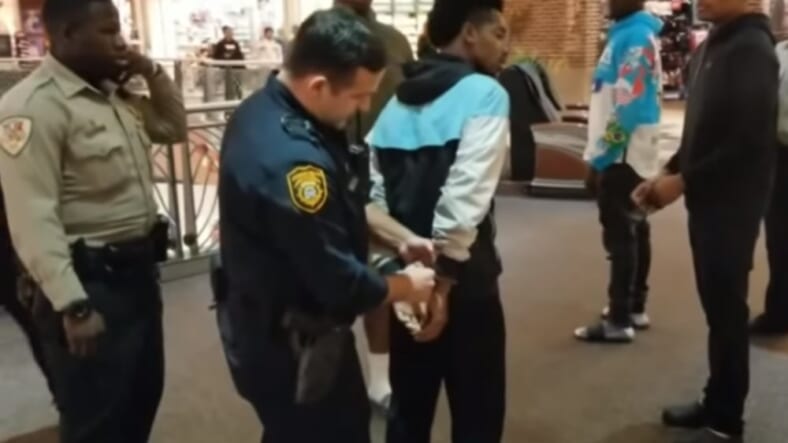 After a group of Black teenagers in Memphis were arrested for wearing hoodies at a mall and after the mall defended the police saying that it was a widespread policy, four white women did the lord’s work and put the so-called policy to the test by wearing hoodies while shopping and the result: they didn’t get arrested.

Sherry Ennis and her three friends viewed the video posted by Kevin McKenzie, who called into question an officer’s motive for following a group of kids wearing hoodies, saying it was clearly racially motivated. The cop said the kids violated the mall’s code of conduct. So Ennis decided to throw on a hoodie and invite her girlfriends out to troll the mall and see if they could be approached and followed and accosted by police too.

The social experiment went off without a hitch. Ennis and her friends did pull the hoodies over their heads to draw attention to themselves, but they were simply asked to take them off their head since it obscured their view. But they wondered why they weren’t removed from the mall like the teens were.

“We pulled them up on occasions and we were approached very politely and asked to remove them — that it was obscuring our identities, so we took them down,” Ennis told Fox 13.

The local news station reached out to the mall for an explanation on why the women were spared embarrassment from being removed.

“We are still waiting on the mall to explain why the women were not forced out of the store as the teenagers were,” said the news anchor.

The Incident in Question

McKenzie was a former journalist for The Commercial Appeal, and when he saw cops following a group of Black teens, he took notice and decided to follow them too at the Wolfchase Galleria last week, WREG reports.

“As a 59-year-old black man and former journalist, my antenna went up,” McKenzie wrote in a Facebook post about the situation.

The 59-year-old said he was on his way to a cellphone store, when he saw a mall cop follow the teens “like he was a cat after mice”. The teens then sped up. But the cop, he said called in backup from the Shelby County Sheriff’s department, who arrived on the scene and put the teens out of the mall.

Their crime: wearing a hoodie. The cop reportedly cited a “no hoodie” policy as their offense.

“I never saw a single hoodie up,” McKenzie said.

When McKenzie tried to speak up for the teens and question why they were being arrested, he was told that Wolfchase’s Code of Conduct states shoppers’ clothing “must be appropriate.” However, The Commercial Appeal noted that the vague policy does not state anything specific about not wearing hoodies.

“Hoodie profiling was news to me,” McKenzie added.

The heated exchange prompted McKenzie to pull out his cellphone and record the interaction.

“You know you’re in violation of mall policy right?” an off-duty deputy says as he walked toward McKenzie. “So you might want to put your phone away.”

McKenzie decided to leave after the deputy told him he was trespassing but as soon as he tried the deputy retaliated and ordered the man to “put your hands behind your back” and he handcuffed him.

McKenzie told WREG he was arrested and transported to the mall’s security office and then to the police station downtown. He was then given a citation for trespassing.

“The officers could have issued me a misdemeanor citation and released me, but I was told that because I continued talking, I was going to jail,” he wrote in a Facebook post. “Initially officers told the young man whose arrest I captured on video that he, too, would be going to jail because I kept talking.”

The teens were forced to sign a form banning them from the mall, but McKenzie refused saying that he didn’t need to because he doesn’t intend to ever return.

“I didn’t need to because I will never spend another dollar at Wolfchase,” he wrote. “I witnessed a mall-to-prison pipeline in action and I will not support it.”

Wolfchase Galleria addressed the incident in the following statement:

“Wolfchase Galleria is focused on providing a safe environment for all customers and employees. We require customers to not conceal their identity while on mall property as a matter of public safety. It is important that our security cameras and security personnel be able to see the faces of everyone on property. Mall security personnel respectfully ask all customers concealing their identity to conform to the policy. Police are only called if a customer refuses or becomes belligerent. In this instance, a MPD officer repeatedly requested the individual to remove his ‘hoodie.’ He did not comply with this directive and was removed from the mall. The incident on Saturday night was managed by the Memphis Police and we refer all questions about the circumstances to MPD.”