Scott required surgery after she was stabbed multiple times trying to protect her sister, Stefanie Vallery, from her estranged husband on Sunday night. 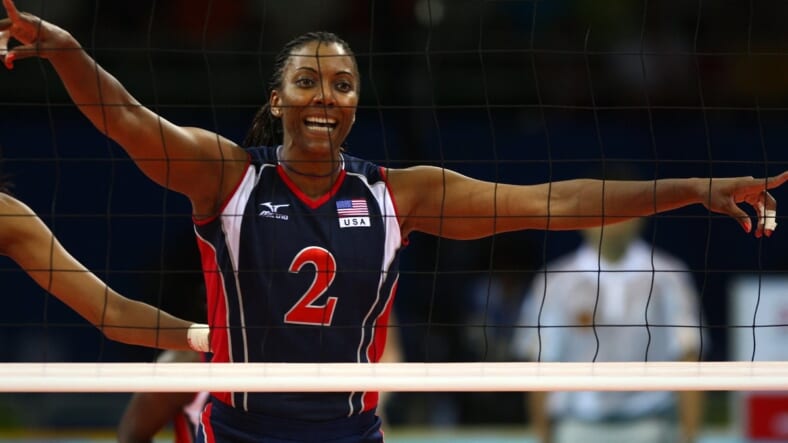 BEIJING – AUGUST 15: Danielle Scott-Arruda of the United States gestures against China during their volleyball match at the Capital Indoor Stadium on Day 7 of the Beijing 2008 Olympic Games on August 15, 2008 in Beijing, China. (Photo by Mike Hewitt/Getty Images)

Vallery, 51, did not survive the attack and police are now searching for Michael Vallery 49. The couple were separated but hadn’t finalized their divorce, according to reports. When he showed up at her home in Baton Rouge, La. Mr. Vallery became enraged during a heated argument and unleashed a violent assault on his ex. Vallery’s daughter Danielle Scott was also injured in the attack.

Danielle Scott was injured as she tried to protect her sister who was stabbed and killed. Please consider helping. https://t.co/7Jq40oXtcu

“He was in a rage. … Things escalated a little more. He left out the house and then (about three minutes later) came back through a window,” Scott told The Baton Rouge Advocate. “He started stabbing her and we were pulling him off of her and fighting for the knife.

“We were trying to put pressure on the wounds, but she had already passed. Then he kicked down the door and came back again. I turned to him and said: ‘You killed my momma.’ He just didn’t care — he ran up and stabbed (her) some more and ran out.”

First responders declared Vallery dead at the scene while Scott was hospitalized in stable condition.

USA Volleyball confirmed on Wednesday that the two-time silver medalist was a victim in the attack.

“USA Volleyball sends our strength, love and support to Danielle and her family,” USA Volleyball CEO Jamie Davis said in a statement. “We are deeply saddened by this heinous incident yet so proud of Danielle’s incredible bravery and wish her a speedy recovery.”