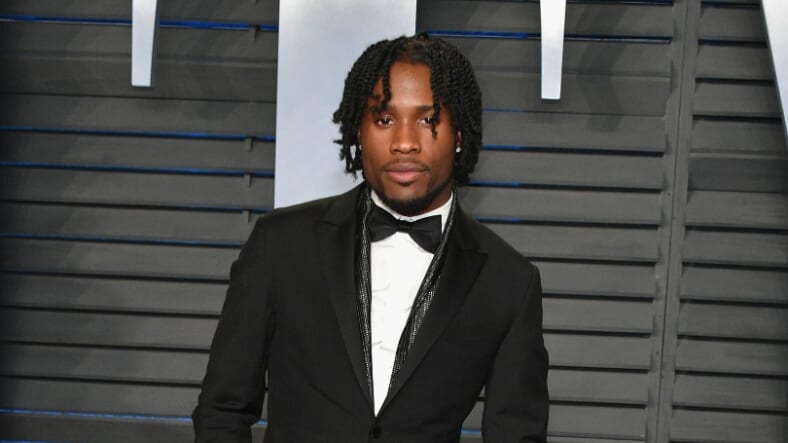 Actor Shameik Moore and star of the action animated film, Spider-Man: Into the Spider-Verse,  stopped by theGrio and spoke with Deputy Editor, Natasha Alford to talk about his new movie, upcoming roles, his love life and much more.

While many Hollywood rising stars love the groupie life, Shameik says he tends to be a more laid back guy on the dating scene.

“If I’m going out and I’m with my boys and they’re looking at me like like, ‘Yo, you’re Shameik.’ Imma flex the muscle. Imma go out and be like, ‘Yo, whats up? How you doing? What’s your name? You Know I’m with my boys.’ Imma play it like that and make it look good,” he told theGrio.

“I speak softly. I have a soft voice. I aint finna walk up to you like, ‘Woo,woo,woo'”

“Imma be like, ‘Hi, I think your hair looks really nice. What are you up to tonight?’ That’s how Imma approach a nice young woman or you know an experienced woman with some sauce. You know what I’m saying.”

Just like many women want men to work for it, Moore says he requires the same energy.

“[I’m] single but I’m not community goods. I’m real picky…you know that choosy lover.  That [song] was made about Shameik, FYI.”

Shameik, who had breakout roles starring in “DOPE” (2015) and Netflix’s “The Get Down” keeps a busy schedule splitting his time between Los Angeles, New York City and Atlanta.

In addition to acting, he’s also a dancer and a music artist.  So Moore says his dating life has to match his ambitious schedule.

“Something I found out about myself is that I need the woman that doesn’t need me but chooses to be around me,” says Moore. “We choose to have shared space and time together. But there’s nothing I need from you and there’s nothing you need from me but we do need each other.”

“That’s when I know Imma have a real relationship,” he continues. “I’ve only had one girlfriend in my life.”

Moore is especially booked and busy with his new movie Spider-Man: Into the Spider-Verse, centered around the first Afro-Latino Spider-Man. The film includes an all-star cast including Mahershala Ali, Zoe Kravitz, Luna Laura Velez, Nicolas Cage, Chris Pine and more. The new film stays true to the classic movie storyline with Miles Morales balancing the life of a superhero and a high school student. The buzz-worthy movie is already receiving rave reviews and hits theaters December 14.

Check out more highlights from the interview below!