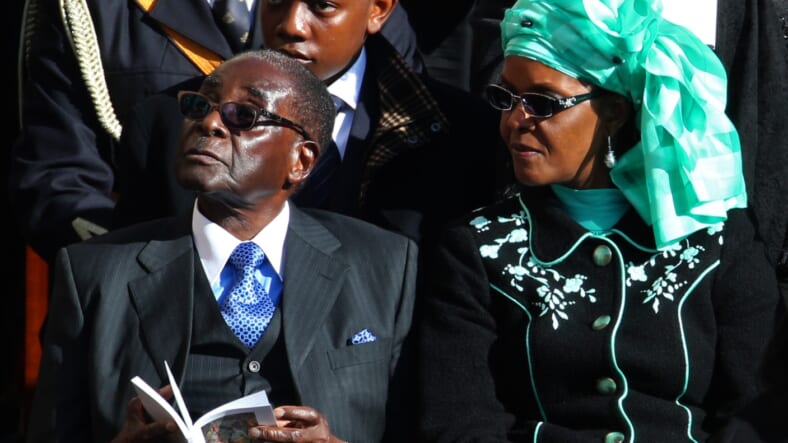 Grace Mugabe, the wife of deposed former Zimbabwean president Robert Mugabe, is in  trouble in South Africa as arrest warrants have been issued for her in connection with an alleged assault of a South African model.

“I can confirm that a warrant for the arrest of Grace Mugabe was issued last Thursday,” South African Police Services spokesperson Brigadier Vishnu Naidoo told CNN, adding that police enlisting help from Interpol.

Mugabe is accused of attacking South African model Gabriella Engels in August 2017. Engels tweeted that Zimbabwe’s former first lady “split my head open in 3 places. With an extension cord and plug to hit me.”

The alleged assault took place in August 2017 after Mrs. Mugabe found Ms. Engels with her two sons, Robert and Chatunga, in a hotel room in Sandton, a wealthy suburb in the city’s north.

According to the BBC, Mugabe was in South Africa to be treated for an ankle injury. Engels released an image of a head injury online and said that she didn’t know who Mugabe was when she entered the room.

“She walked in with an extension cord and just started beating me with it. She flipped and just kept beating me with the plug,” she said. “Over and over. I had no idea what was going on. I needed to crawl out of the room before I could run away.”

“There was blood everywhere,” she added. “Over my arms, in my hair, everywhere.”

Mugabe was granted diplomatic immunity over the incident by South Africa’s former Minister of International Relations and Cooperation Maite Nkoana-Mashabane, allowing her to leave the country. However, in July, a South African High Court overturned the decision and opened the door for prosecution and extradition.

Zimbabwe has not decided on whether to extradite her. Grace Mugabe, who was reportedly being groomed to replace her husband Zimbabwe’s president before he was forced to resign amid a military coup in November 2017.

She split my head open in 3 places.
With an extension cord and used the plug to hit me. https://t.co/WNf2Y1C5uK