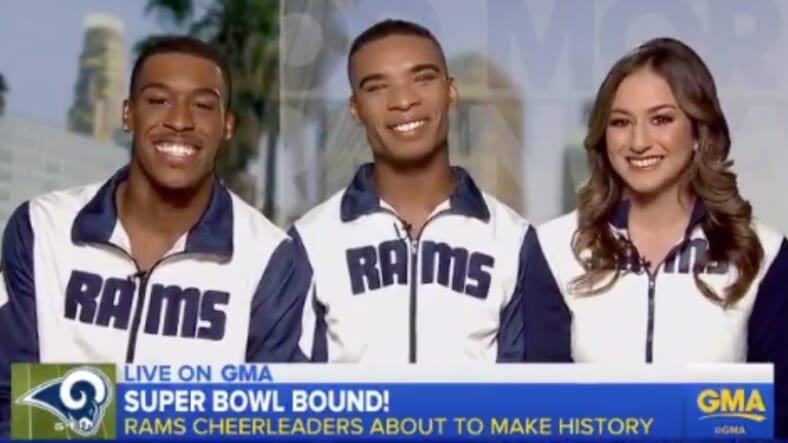 The dynamic duo made history by joining the LA Rams cheer team in 2018.

2018 first male cheerleaders in the NFL

They love to dance and are excited to take their talents to the biggest stage in the world on February 3rd when the LA Rams face the New England Patriots.

“Yeah, you get to put on the uniform, but for us this is just another stage,” Peron, who teaches dance and choreography and used to appear in parades at Disneyland alongside several of his fellow Rams cheerleaders, told Fast Company. “As a performer, you will do anything to get on another stage.”

Jinnies is a freelance makeup artist, beauty blogger, and Disneyland dancer as well.

Appearing on GMA this morning, they couldn’t wait to share their excitement for their Super Bowl performance.

These @RamsNFL cheerleaders are about to make history – male cheerleaders will be at the Super Bowl for the first time! “I’m speechless.” pic.twitter.com/MJLVicD3oI

Since Peron and Jinnies officially joined the team last spring, they say they’ve received a lot of encouragement from management and the football players.

But according to Fast Company, whe new Rams cheerleaders made their debut on August 18 in the preseason home opener against rival the Oakland Raiders, things didn’t go as planned. Rams season-ticket holder Suzanne Sharer told the magazine the energy in the Coliseum was toxic, with drunk Raiders fans targeting the male cheerleaders with verbal abuse.

Sounds like Peron and Jinnies will get the last laugh next sunday!