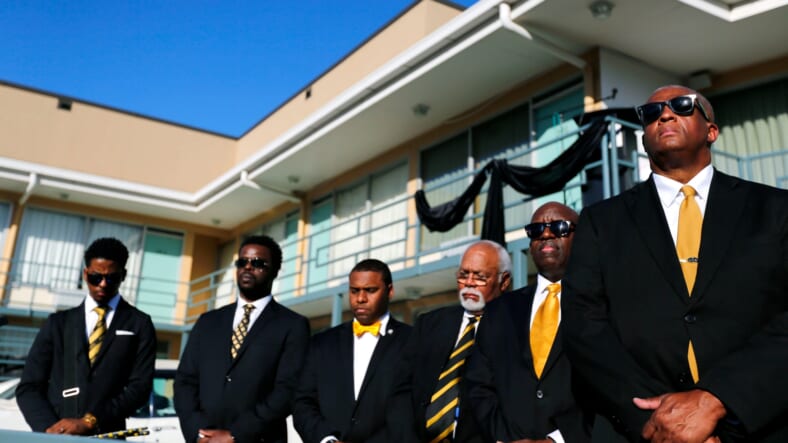 Men with the Alpha Phi Alpha fraternity stand outside the National Civil Rights Museum on April 4, 2017 in Memphis, Tennessee. The balcony draped in black cloth behind them is where Dr. Martin Luther King, Jr., a member of their fraternity, was struck down by an assassins bullet 49 years ago. (Photo by Mike Brown/Getty Images)

Bennett College, the historically Black women’s college in Greensboro, N.C. is currently fighting for its accreditation and it got some help from the country’s first Black fraternity as well as Papa John’s.

Alpha Phi Alpha Fraternity, Inc. has donated $31,000 to Bennett to help the school stave off losing its accreditation on Feb. 1. The financially-strapped school needs to raise $5 million quickly.

Chuck Wallington, President of the organization’s Kappa Lambda Chapter presented Dawkins with a check for $1,000 from members of the Greensboro chapter. In December, the Board of Trustees with the Southern Association of College and Schools Commission voted to strip Bennett’s membership due to financial instability.

Bennett was founded in 1873 and has been a college for women school since 1926. Board of Trustees Chair Gladys Robinson told Greensboro’s WXII 12 that said she is confident the school will meet the goal.

“We have alumni all across the country and the world who are making contributions and do it every year, but this year they’ve got to double up, but we also have friends out there who believe in what we do here at Bennett,” Robinson said. “It’s important to sustain Bennett College, because there are a lot of women, young women who need this opportunity for education,” Robinson said.

Robinson said they have a number of backup plans in case they come up short of the goal, including applying to another accreditation organization, to maintain accreditation at Bennett College. Late on Thursday, Papa John’s Pizza donated $500,000 to Bennet to help them reach their goal.

.@PapaJohns and The Papa John’s Foundation is proud to #StandwithBennett. The @BennettCollege mission is critical, and continues our legacy of supporting colleges around the country. https://t.co/Gtkxug5W47