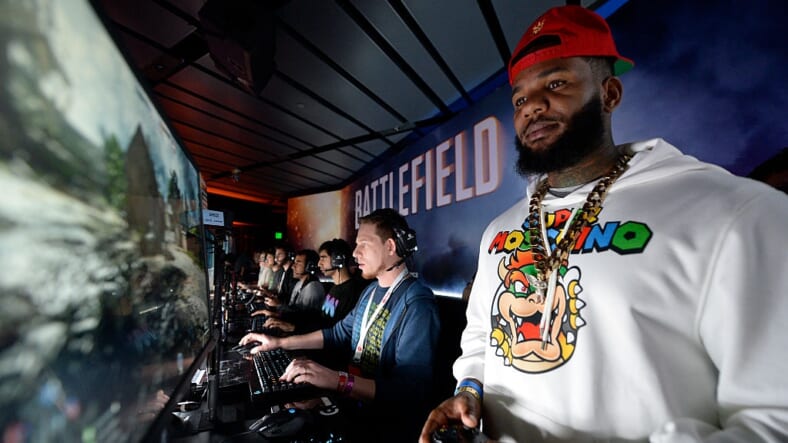 The Game is still yapping his jaws about the Kardashian-Jenner clan and in true grade-school fashion, making suggestions about the sisters he may have slept with.

In his most recent rap and tell, and barely a week after he was heard rapping sexually explicit lyrics on a soon-to-be-released track about his previous relationship with Kim Kardashian, Game raps: “I held Kim Kardashian by her throat, n***a. I made her swallow my kids until she choke, n***a / I should apologize cause ‘Ye is my folks, n***a.”

Yesterday, DJ Akademiks posted a second clip filmed during The Game’s studio session, according to Complex magazine. In the clip, an unreleased track is heard in the background, with Game dishing on the 21-year-old makeup and beauty mogul.

“Her sister made a billion in makeup. I use to make her Frosted Flakes when she wake up,” Game raps.

And the Compton rapper doesn’t appear to be backing down anytime soon. Friends allegedly tried to get him to pull the controversial line, but he refused.

In an Instagram story, Game said: “I said what I said. I didn’t start rapping to be a nice guy. I speak my truths to my fans. If you don’t like it, don’t listen to it. F**k you.”

He goes on to say: “One bar got everybody in their feelings. On a scale of 1 to 10, bout how mad are you” before ending the post with the hashtag #BorntoRap.

Kim and Kylie have not responded. Neither has Kanye.

READ MORE: University of Oklahoma football players march in protest of students in blackface on campus

But this isn’t the first time Game has made these allegations. He went on The Wendy Williams Show a few years ago and claimed he had “f**ked three Kardashians,” a point he also raps about in his 2016 track “Sauce.”

On the show, Game acted coy when Williams asked him which sisters he slept with before getting him to comment on Chyna, Kim and Kylie.

“You know what, this is what I’ll say. I’ll tell you this. Kanye (West) is a really good friend of mine. And they got really, really beautiful kids, and I don’t want to disrespect their family,” Game told the TV talk host.

Not sure what changed and why The Game is willing to dish now.