7 of our Favorite Black Love couples 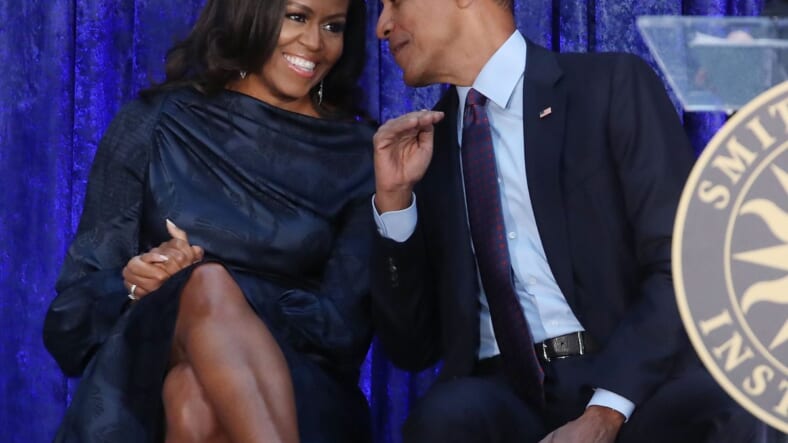 Former U.S. President Barack Obama and first lady Michelle Obama participate in the unveiling of their official portraits during a ceremony at the Smithsonian's National Portrait Gallery, on February 12, 2018 in Washington, DC. (Photo by Mark Wilson/Getty Images)

Our forever POTUS and FLOTUS are goals… Couple goals!

The couple met in the 1980s at the Chicago law firm Sidley & Austin, and have proven that the secret to their 25-year marriage is keeping the lines of communication open and truthful.

“One of the things that attracted me to Barack was his emotional honesty. Right off the bat he said what he felt. There are no games with him — he is who he appears to be. I feel fortunate as a woman to have a husband who loves me and shows me in every way,” Michelle Obama told The Huffington Post.

Further, Barack Obama gave his former communications director, upon learning that he was about to settle down, some marital advice in the form of three questions.

“Here’s the advice I give everyone about marriage,” Barack Obama began, according to Dan Pfeiffer in an excerpt from his book, Yes, We Still Can. “Is she someone you find interesting?” Pfeiffer quoted Obama saying, according to The Independent. “You will spend more time with this person than anyone else for the rest of your life, and there is nothing more important than always wanting to hear what she has to say about things,” Pfeiffer elaborated on what his former boss meant.

“Does she make you laugh? And, I don’t know if you want kids, but if you do, do you think she would be a good mum?” were President Obama’s two remaining questions, for which Pfeiffer said he responded that his partner was “incredibly interesting, funnier than I am and will be a phenomenal mum.”

They are a match made in thespian heaven. Dondre Whitfield is the hunky irrigation specialist who is close friends with the Bordelon family on OWN’s Queen Sugar. Salli Richardson is also a TV and film actress who is best known for her roles on A Low Down Dirty Shame and Eureka.

Together, the gorgeous couple have been married since 2008 and are the parents of two adorable kids.

In an interview with AALBC, a fan asked Richardson whether she was happy. The actress gushed: “Yes! My husband, Dondre, and my two children make me incredibly, incredibly happy. Plus, I get to go to work doing a job that I love. I’m very happy and grateful.”

Awww. This makes us all happy!

Multi-hyphenate TV show creator and actress Lena Waithe is making waves in Hollywood but stays grounded thanks to her fiancee Alana Mayo.

“The great thing is, she’s not jazzed by it,” Waithe said in an interview with the New York Post. “She definitely helps to keep me grounded … When I get home from winning an Emmy, she’s like, ‘Don’t forget to take out the recycling.’ It’s those things that I think are really helpful. She’s so laid back about it all.”

The beautiful couple got engaged during the Thanksgiving holiday in 2017. Waithe told Elle, Mayo is like a black Audrey Hepburn, and even though she has a “swaggier style,” they complement each other really well.

But don’t expect a super lavish Hollywood wedding for Waithe and Mayo.

“It’s going to be super small, crazy small,” Waithe told People about their wedding plans. “It’s almost like an excuse to have fun with our friends.”

“I think it’ll be pretty fly,” she told Elle. “She’s pretty fly. It’ll be small and intimate honestly, but

Gabrielle Union and Dwyane Wade have given us reason to hope and to persevere.

Actress Gabrielle officially started dating basketball player Dwyane in 2009, and they married in August 2014. He has two sons by his previous wife, Siohvaughn Funches, and although things started out rough – with Funches alleging Wade and Union started dating while she was still married to Wade and releasing a tell-all book in 2016 – things appear to have somewhat settled down in the past year or so.

Last August, Dwyane and Gabrielle celebrated their four-year wedding anniversary. And the journey has been one of discovering why their union was worth the effort.

After “8 or 9 miscarriages,” according to Union, the celebrity duo became parents of a gorgeous brown, chubby-cheek baby girl via surrogate last fall. Swoon!

“We were always best friends but we weren’t always present… The love was always there, but we couldn’t figure out how to be a partner at the same time and at the same rate,” Gabrielle told The Huffington Post. “And then we could. It was just like, you’re my best friend in the world and I love you so intensely, let’s figure it out.”

The comic and radio/TV talk show host married his fashionable queen in 2007.

The two are great because every King needs his Queen, according to Harvey.

“… greatness is when you’re the husband and father you’re supposed to be. When everyone surrounding you looks up to you, depends on you, and you come through for them. That’s greatness. Do you think Dr. Martin Luther King was anything without Coretta? You take Michelle out of Barack Obama’s equation, and he is a whole other dude out there,” said Steve Harvey.

6. Will Smith and Jada Pinkett Smith

Whatever Will Smith and Jada Pinkett Smith are doing, they are doing right.

The couple has been married since 1997, and although they don’t usually celebrate their New Year’s Eve wedding anniversary, because he’s out on an adventure and she likes to be at home, their love is real and for a lifetime.

“It’s more of a life partnership, so it’s not steeped in marital, in that day,” Jada explained on her Facebook Live Red Table Talk show. “We don’t really celebrate that day, you know what I’m saying, any more in that sense because the context of our union is totally different.”

They are that familiar with one another that they are free to be themselves and to pursue their interests, knowing that each of them has the others’ back, always.

Oh my goodness, are they cute!

In a clip of “Black Love” that didn’t air in the series, Sterling K. Brown gave us chills when he told the audience that he stole Ryan’s bike and hid her pillow while they were college freshmen to get her attention because he was awkward and was unsure how to deal with his growing love for her.

“I loved her so much I couldn’t stand to be her friend,” Sterling admitted, to the gushes from the crowd.

Sterling and Ryan come across as smart, assured and lovable. What’s not to root for?