The actor could face up to three years in prison if convicted of the felony. 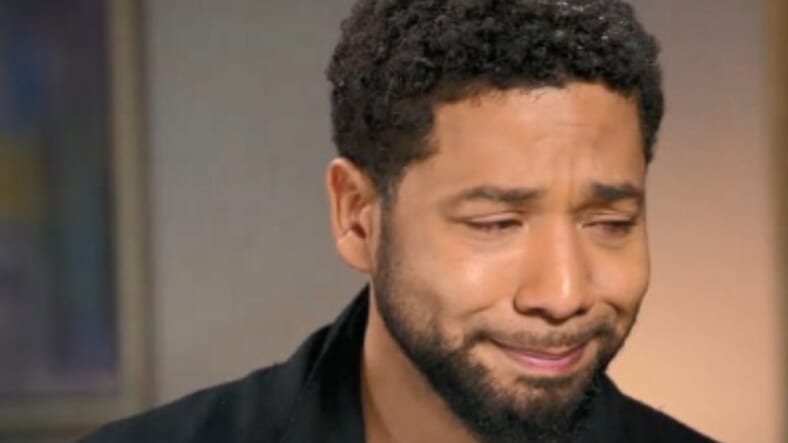 Jussie Smollett spoke with Robin Roberts on GMA for his first TV interview since his assault in Chicago. (ABC News)

According to CNN, actor and music artist Jussie Smollett has been indicted by a grand jury for filing a false police report in connection with his alleged assault in Chicago last month.

If found guilty of filing a false police report, which is a disorderly conduct class 4 felony, Smollett could face up to three years in prison. A bail hearing is scheduled for February 21.

Smollett claimed that two men yelled homophobic and racist slurs at him as they assaulted him near his home in Chicago and vocalized their MAGA support. Reportedly, a noose was slung around Smollett’s neck and bleach was poured on him.

The actor was initially surrounded with a wide ring of support from celebrities, fans, and  even politicians. People rallied around this openly gay Black man who seemed to be a assault victim. The mistreatment and even homicide of the LGBTQ+ of color community is a rampant issue that was further highlighted by this incident involving a famous person.

However, doubt began to creep in as people questioned the basic facts of Smollett’s story. Some thought it strange that a situation such as this would occur during the Polar Vortex on one of the coldest nights in Chicago’s history. Others wondered what were the odds of  MAGA supporters knowing about Empire and further that Smollett played a gay character on the show.

Smollett attempted to address these questions in his emotional appearance on Good Morning America during his interview with Robin Roberts.

The situation got even more bizarre when a pair of muscle-bound Nigerian-American brothers who had appeared as extras on Empire were arrested then released for the Smollett assault.

In a joint statement, the brothers said: “We are not racist. We are not homophobic and we are not anti-Trump,” they said. “We were born and raised in Chicago and are American citizens.”

Various “leaks” from the Chicago Police Department suggested that detectives believe Smollett paid the brothers to participate in an orchestrated attack.