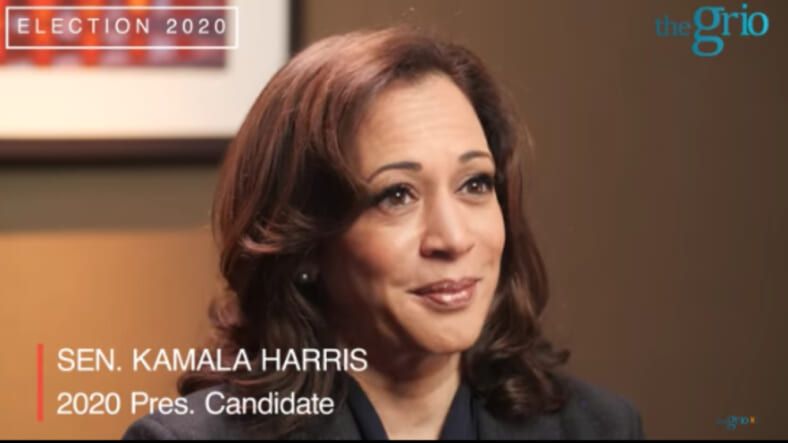 Sen. Kamala Harris talks about her plan for Black America in an interview with theGrio’s Natasha Alford at the 2019 Power Rising conference in New Orleans. (theGrio)

In an exclusive interview with theGrio, presidential hopeful Sen. Kamala Harris (D-CA) addressed the question of her intended policy plan for the Black community, should she win the general election in 2020.

Sen. Harris, who was a keynote speaker at the 2019 Power Rising Conference, a political gathering of African-American women and girls, laid out three specific examples of targeted policies, as well as general concepts, which are intended to impact African-Americans across the board.

Below are highlights of Sen. Harris’ explanation of the purpose behind her policy agenda:

WASHINGTON, DC – MAY 23: U.S. Sen. Kamala Harris (D-CA) (L) plays with 18-month-old Hawa Tembe (R), whose mother is an immigrant from Mozambique, during a news conference on immigration in front of the U.S. Capitol May 23, 2018 in Washington, DC. Sen. Harris, joined by other female Democratic congressional members, held a news conference “to show support for immigration and refugee policies that protect the rights and safety of women and children.” (Photo by Alex Wong/Getty Images)

“I have actually sponsored a bill and intend as President of the United States to make sure it is passed around recognizing that Black women are three to four times more likely to die in childbirth,” says Sen. Harris.

The bill creates grant programs which aim to reduce racial disparities and directs the National Academy of Medicine to find ways to include bias recognition in testing for medical schools.

“It is literally about racial bias and in the medical health professions that cause people to not take black women seriously when they walk into the door of that hospital or that emergency room.”

“I am a proud graduate of Howard University,” says Sen. Harris, who majored in political science and economics, and pledged Alpha Kappa Alpha Sorority, Inc.

“I know that our HBCUs have raised and helped raise generations of leaders in this country and do it in a very special way. That is about nurturing and about creating high standards and challenging young people to be their best. Not giving them any excuse but giving them all kinds of support.”

“I am right now working on– and actually got it out of the Senate and the House passed it– around giving more money to HBCUs around their historic landmarks. But there is more to be done around creating incentives for more young people to go into the STEM professions through HBCUs.”

CHICAGO, IL – OCTOBER 05: Demonstrators protest as they celebrate the verdict in the murder trial of Chicago police officer Jason Van Dyke along Michigan Avenue on October 5, 2018 in Chicago, Illinois. Van Dyke was found guilty of second-degree murder and 16 counts of aggravated battery in the shooting death of 17-year-old Laquan McDonald on October 20, 2014. (Photo by Joshua Lott/Getty Images)

“We cannot have a society where a father or mother by the time their son turns about 12 years old has to sit down and have ‘the talk’ with him about how he will be stopped or chased or arrested or even killed because of the color of his skin,” Sen. Harris tells theGrio.

“Those need to be reopened and revived with vigor.”

Sen. Harris says she would also address consent decrees, which are agreements that require police departments to reform.  But while in office, former Attorney General Jeff Sessions limited their usage.

“This Department of Justice has essentially shut those down,” says Harris. “First order of business from would be to revive those.”

Sen. Kamala Harris talks about her plan for Black America in an interview with theGrio at the 2019 Power Rising conference in New Orleans. (theGrio)

“My first order of business when elected president that is about lifting up middle class working families,” Sen. Harris told theGrio.

“What I’m proposing specifically is that families that are making a $100,000 or less would get a tax credit that they would receive, up to five hundred dollars a month.”

The LIFT Act is estimated to provide an average $2000 to middle class families.  The Atlantic has compared its impact President Trump’s tax plan, but without a boost for the highest earning Americans.

“This proposal economists across the board have said would be the most significant middle class tax cut for American families in generations and it would lift up 60 percent of Black families out of poverty,” says Sen. Harris.

According to Dylan Matthews of Vox, the bill still falls short in terms of helping the poorest Americans who aren’t working. “Recipients must be working and earning at least $3,000 a year to get the full benefit. If you make $0, you get $0 in benefits,” Matthews writes.

Do Black Americans deserve policies exclusively for them?

EGG HARBOR, NJ – AUGUST 28: People stand in line to receive fresh bread and produce at the Community Food Bank of New Jersey on August 28, 2015 in Egg Harbor, New Jersey. The food bank has seen a 11 percent increase in food distribution in Atlantic County since some 8,000 people were layed-off when four of Atlantic City’s major casinos closed in 2014. The closures brought Atlantic City’s unemployment rate to more than 11 percent, double the national average. The mass unemployment has produced the highest foreclosure rate of any metropolitan U.S. area, with 1 out of 113 homes now in foreclosure in Atlantic County. (Photo by John Moore/Getty Images)

The mantra of a “rising tide lifting all boats” proposes that improving the general economy, will benefit everyone within that economy.

But a widening racial wealth gap shows that Black households still aren’t catching up.  The Economic Policy Institute estimates “one in four black households have zero or negative net worth.”

So should Black Americans advocate for policies that specifically address our community’s needs?

Watch our full interview with Sen. Kamala Harris above and on theGrio’s YouTube channel.

Natasha S. Alford is Deputy Editor of theGrio where she covers politics, entertainment and culture.  Follow her on Instagram and Twitter at @NatashaSAlford for the latest updates.