Brenton Tarrant, the man police say killed 49 people in a Christchurch mosque, say he took his queues from the Black conservative, but her response to what happened seemed gauche and cavalier 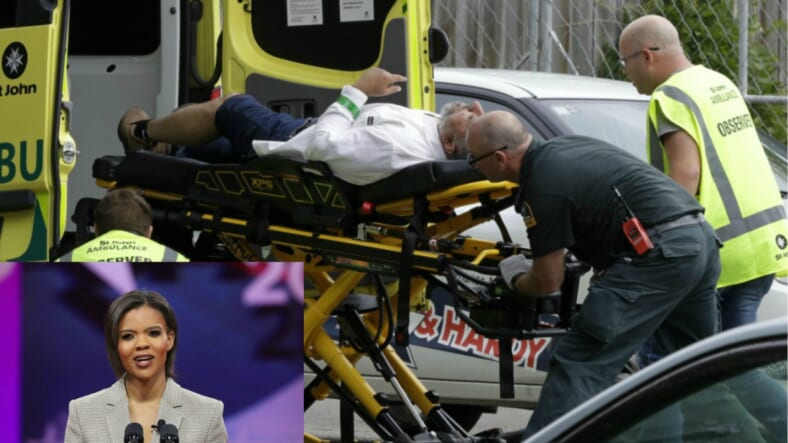 The white supremacist who live streamed himself murdering 49 people in two mosque attacks in New Zealand – the worst in the country’s history – claims he was inspired by Black conservative activist Candace Owens.

Brenton Tarrant, 28, was one of three men arrested by police in the devastating attack. He credited Owens for radicalizing him in a 74-page manifesto that he posted online. The manifesto was reported on by several major global news outlets, but not yet verified by police on Friday. Law enforcement officials say Tarrant opened fire inside the Masjid Al Noor mosque in Christchurch, NZ, killing 49 people and wounding dozens more.

“The person who has influenced me above all is Candace Owens. Each time she spoke I was stunned by her insights and her own views helped me push further and further into the belief of violence over meekness,” Tarrant writes in his manifesto entitled: “The Great Replacement”, in response to a question that asked: “Is there a particular person that radicalized you the most?”

Tarrant added, however, that some of Owens’ beliefs go further than he’s comfortable with. “However, I will have to disavow some of her beliefs, the extreme actions she calls for are too much, even for my tastes.”

Tarrant calls himself “a regular white man, from a regular family, who decided to take a stand to ensure a future for my people,” according to the manifesto. “My parents are of Scottish, Irish and English stock. I had a regular childhood, without any great issues.”

In response to her name being mentioned, Owens took to Twitter to defend herself, in two bizarre posts that blame liberals instead of Tarrant.

FACT: I’ve never created any content espousing my views on the 2nd Amendment or Islam.

The Left pretending I inspired a mosque massacre in…New Zealand because I believe black America can do it without government hand outs is the reachiest reach of all reaches!! LOL! https://t.co/4vM1aXleL4

Using what may have been a helmet camera, Tarrant reportedly livestreamed to the world in graphic detail his assault on worshippers at Christchurch’s Al Noor Mosque, where at least 41 people were killed. An attack on a second mosque in the city not long after killed several more. However Facebook, YouTube and others scrubbed the video not long after it went up.

Witness Len Peneha said he saw a man dressed in black enter the Al Noor mosque and then heard dozens of shots, followed by people running out in terror.

Peneha, who lives next door, said the gunman ran out of the mosque, dropped what appeared to be a semi-automatic weapon in his driveway and fled. He said he then went into the mosque to try to help the victims.

“I saw dead people everywhere. There were three in the hallway, at the door leading into the mosque, and people inside the mosque,” he said. “I don’t understand how anyone could do this to these people, to anyone. It’s ridiculous.”

He added: “I’ve lived next door to this mosque for about five years and the people are great, they’re very friendly. I just don’t understand it.”

Meanwhile, world leaders expressed sympathy for the victims of the shooting and expressed outrage over growing anti-Muslim hatred.

“I blame these increasing terror attacks on the current Islamophobia post-9/11 where Islam & 1.3 bn Muslims have collectively been blamed for any act of terror by a Muslim,” he tweeted.

The secretary-general of the 57-nation Organization of Islamic Cooperation, Youssef al-Othaimeen, said in a statement that the attack “served as a further warning on the obvious dangers of hate, intolerance, and Islamophobia.”

President Trump tweeted condolences to New Zealand and offered the assistance of the United States.

My warmest sympathy and best wishes goes out to the people of New Zealand after the horrible massacre in the Mosques. 49 innocent people have so senselessly died, with so many more seriously injured. The U.S. stands by New Zealand for anything we can do. God bless all!