A 26-year-old South African TV news personality simply tried to lent a hand to motorists in trouble. But what he found were remnants of his country's old hatred 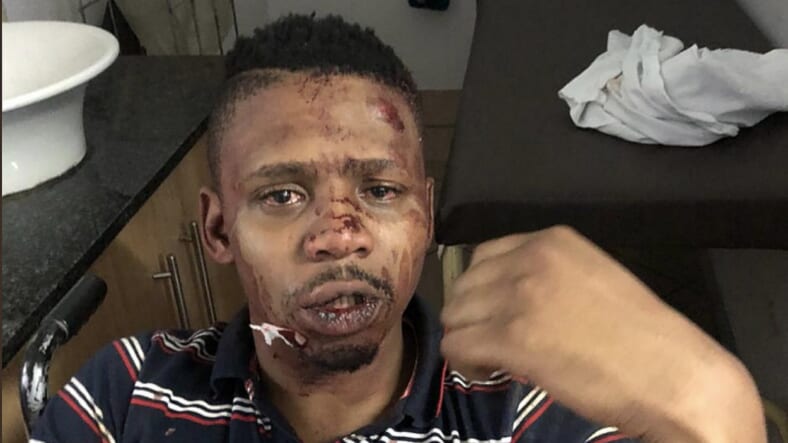 A television host in South Africa said he only wanted to help a group of stranded white motorists, but they had sinister motives when they reportedly beat him viciously in a racist attack.

Samora Mangesi, a newscaster for the South African Broadcasting Company, told Buzz Feed News that he was trying to help out when he and two female friends pulled over around 1:30 a.m., on Saturday to help the five motorists, whose car had flipped over.

“We asked if they were OK, if they needed us to call the cops, or to call a friend,” Mangesi said in an interview from Johannesburg. “First reaction we got was them saying, ‘Go [away], monkeys,’ in Afrikaans.” He said they also called his friends “black b*tches.”

“We said, ‘But guys, we’re only trying to help you. Why are you calling us monkeys, using derogatory terms?’” Mangesi recounted. “We were telling them how, in 2019, you can’t call people monkeys, especially Black people, given this country’s history.”

It was then that someone came from behind the newscaster and hit him in the head. The next thing he remembers was waking up in a local hospital, having blacked out at the impact of the blow.

READ MORE: In South Africa, being a racist prick has legal consequences, as one ex-politician learned

Mangesi recounted the story and posted graphic images from his attack, including a badly battered face, on Twitter. He said he was viciously kicked and beaten resulting in substantial injuries on his face and sides, according to Atlanta Black Star.

On Friday night I was the victim of a racially motivated attack. After stopping to check on a group of young white people whose car had overturned, they called my friends & I Monkeys. When we engaged them on why we were being called such, they beat me up until I was unconscious. pic.twitter.com/E9DOGpPacJ

Mangesi added that one of his assailants even tried to run over his friend while he received medical treatment, prompting the emergency responders to get involved.

“Even whilst I was being put in the ambulance, one of these guys tried to run my friend over with his bakkie (pick-up truck) and the paramedics had to intervene,” Mangesi wrote on Twitter. “As much as they say I was awake, I don’t remember being in the ambulance, arriving at the hospital nor much of the treatment.”

Now Mangesi wants justice. Initially, he considered not filing a police report, but has since decided to turn over video of the incident, along with other information and photos he collected from the incident, to authorities.

Police say they are investigating, according to BBC News.