‘Hate has no place in Chicago’: Mayoral candidate targeted by homophobic flyers 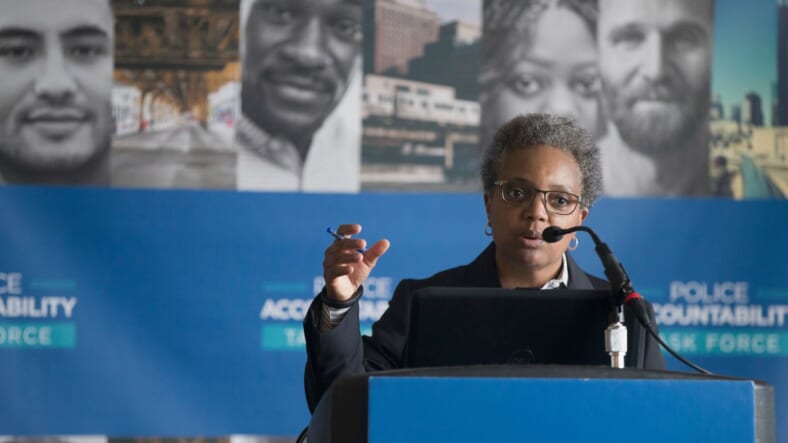 Homophobic fliers targeting Chicago mayoral candidate Lori Lightfoot were distributed on cars around the South Side over the weekend.

The openly lesbian politician denounced the attack, saying  “hate has no place in Chicago,” at a City Hall news conference Monday morning.

As reported by the Chicago Tribune, the flyers reportedly show a photo of Lightfoot and her wife with their arms around each other along with the caption, “The Feminist and Gay Movement Have Come Full Circle!”

Underneath their picture, the couple say, “The GAY EQUALITY ACT!!! ITS OUR TURN.” Below it reads: “1st openly gay woman in City Hall.”

The back of the flyers note that Lightfoot is “pro law enforcement,” and “All contracts, jobs, and employment newly assigned exclusively to gay people!”

The report states that the flyers also read: “With our people in City Hall, I promise to enforce the Gay Equality Act. All churches will abide by the gay marriage laws. All public restrooms will be gender free. All public schools will teach Gay History by mandate. School restrooms must be DE-SEGREGATED.”

Lightfoot, a former federal prosecutor, urged the city to “stand together” and “denounce any attempts by anyone to propagate hate.”

The homophobic flier comes a week after many slammed her opponent, Toni Preckwinkle, of using Lightfoot’s sexual orientation to sway anti-LGBTQ influencers and voters. But the Cook County Board President has also condemned the flyers.

“I condemn them, they have nothing to do with our campaign,” Preckwinkle said Monday. “It’s disgraceful.”

“I have no idea where it came from, and as I said, it’s despicable.”

Former mayor of Houston, Annise Parker — who is openly gay — released a statement condemning the flyers. She is now president and CEO of the national LGBTQ Victory Fund, which is backing Lightfoot.

“Homophobic forces attempting to derail Lori’s historic candidacy are using the politics of hate and fear to mobilize anti-LGBTQ voters for Toni Preckwinkle,” said Parker. “The attack flyers are infused with mischaracterizations of the LGBTQ community and the laws that protect them — including bigoted stereotypes that are too often used against LGBTQ candidates when their opponents get desperate. Chicagoans, regardless of who they support, must speak out forcefully against efforts to mobilize voters through bigotry.”

It’s unclear how many fliers were distributed.