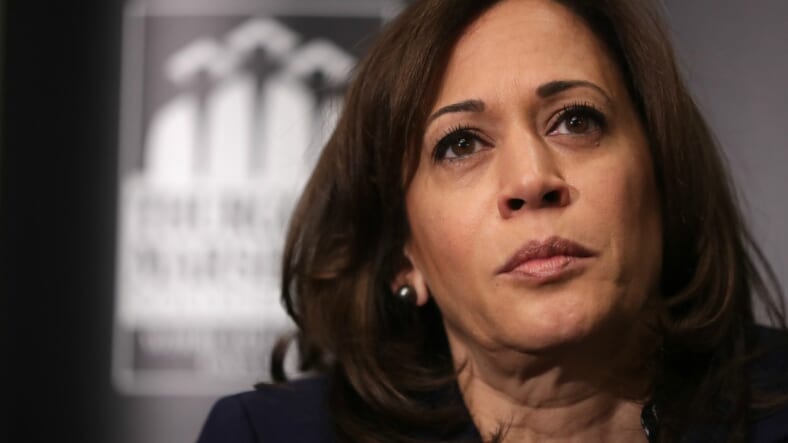 If past elections were any indication, Kamala Harris has a secret force rallying behind her in her bid to secure the Democratic nomination for president in the 2020 elections: Black women.

Case in point: In 2013, Halle Berry gave $6,800 to get the former California attorney general reelected, and Jonelle Procope, CEO of the Apollo Theater, contributed $8,300 toward Harris’s 2016 U.S. Senate campaign and affiliated PACs, according to Yahoo! Finance.

—Offset stops by Ellen to talk fatherhood, Cardi B and money—

And then the former Black Entertainment Television CEO, Debra Lee, donated $2,500 and Crystal McCrary, a movie and TV producer, plunked down $4,500, each to help Harris win her Senate seat and also for affiliated PACs.

For each campaign Harris has run, millions of dollars have poured in. A significant portion of that money has come from Black women, by some estimates as much as hundreds of thousands of dollars, Yahoo! Finance reported.

In 2016, Demos released a study that found a shortage of info on Black women campaign donors, but Black women have given to Harris in the past and are expected to give during this presidential run.

“This is a moment for black women seeing all the power they have and taking advantage of that,” Kimberly Peeler-Allen, the co-founder of Higher Heights, told Yahoo! Finance. Higher Heights trains and helps to fund Black women, political candidates. “Our universe is definitely growing.”

Harris seems aware of the #BlackGirlMagic and is making political appearances before the key demographic.

In January, shortly following her announcement to run, Harris stopped in Columbia, South Carolina, and spoke before a chapter of Alpha Kappa Alpha, the oldest Black sorority in the United States. “We stand on the shoulders of women, who were leaders, who 111 years ago said to us we must honor sisterhood and service,” said Harris, who herself is a member of the organization, Yahoo! Fitness reported.

In March, Harris addressed the annual Women of Power Summit, which caters to executive women of color. “You will find many times in your life…that you will be the only woman who looks like you in the room,” Harris reportedly told attendees, according to Yahoo Finance!

Who knows, Black women may just be the key in keeping Harris competitive in the crowded field of Democratic hopefuls.