CHILD WONDERS: Evan Alex and Shahadi Wright Joseph are the breakout stars of ‘Us’ 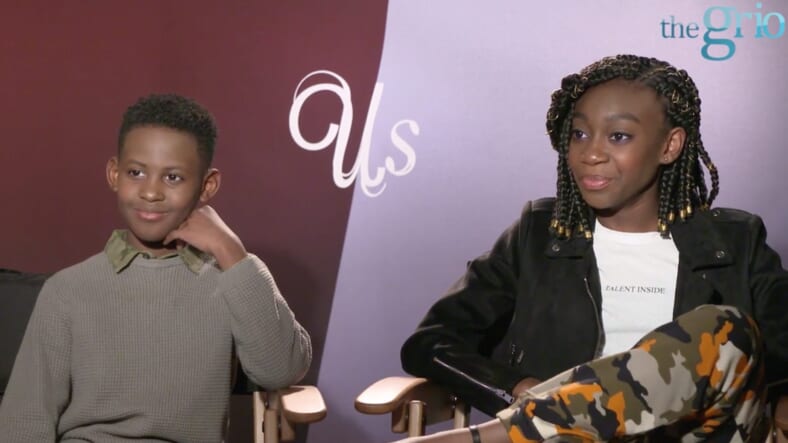 While the latest horror flick from Jordan Peele offers plenty of opportunities to marvel, the real breakout stars of Us are Shahadi Wright Joseph and Evan Alex.

These young stars took on some seriously challenging roles and held their own against the undeniable talents of Lupita Nyong’o and Winston Duke in the movie that is sure to go down in history as one of the greatest horror films of all time.

TheGrio caught up with Evan Alex, and Shahadi Wright Joseph to find out how they channeled their dark sides to play two roles and learned that they’re just as impressed with their performances as we were.

“There was a little bit of pressure that I was putting on myself because I always felt like I had to be perfect,” admits Shahadi Wright Joseph. “What I learned from Jordan is really that when you’re on set you really just need to try things and it doesn’t matter if they’re awkward or not…just try them and they might turn out to be incredible. I think that we all really did such a great job.”

Lupita Nyong’o on the “painstaking work” required to master her leading roles in ‘Us’: ‘I felt like I might just go crazy”

The 13-year-old actress who showed off her singing chops as Inez Stubbs in NBC’s Hairspray Live! in 2016.

“While shooting [Jordan]  told me that she’s like the opposite of Zora and she is very sleek and always ready to fight somebody and I thought that that was really helpful. I think that she came out as such a fierce character.”

“Fierce” is an understatement when describing the way Shahadi Wright Joseph embodied a typical teenager as effortlessly as she played the creepy-eyed, blood-curdling, sinister character of Umbrae.

WATCH: ‘Us’ star Winston Duke on tackling race issues and the horror genre: “I never saw myself”

The adorable Evan Alex proved he’s a force to be reckoned with in his roles of Jason Wilson and Pluto. The 10-year-old who drew inspiration from watching videos of people crawling around like dogs and werewolves told us he thoroughly enjoyed his time onset with his costars, Duke and Nyong’o.

“They were great. Working with them was an honor and I wanted to impress them because they’re so professional and if you’re just goofing around all the time then that’s not going to set you a good foot,” he explains.

Check out our full interview above.