The film was nominated for 14 awards at the 50th annual NAACP Image Awards. 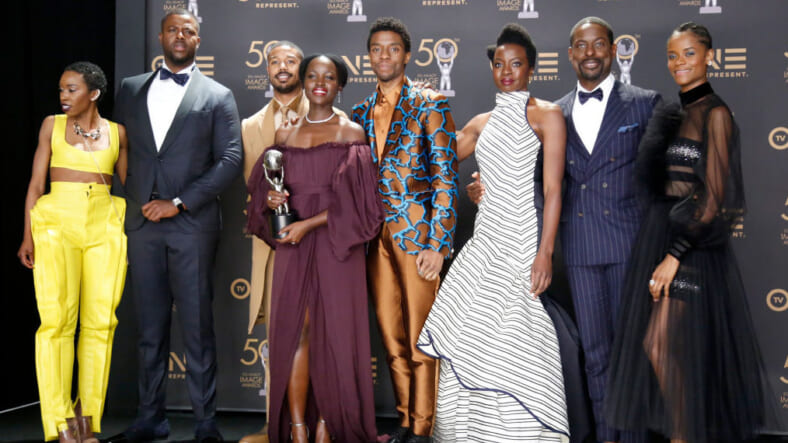 Black Panther was big winner at the 50th annual NAACP Image Awards on Saturday night. The Ryan Coogler-directed Marvel film that earned 14 nominations proved its power during the star-studded event with several of the movie’s stars going head to head in big categories.

Chadwick Boseman won the first award of the night for Outstanding Actor in a Motion Picture for his starring role as T’Challah. He took time to shout out his alma mater during his acceptance speech.

“H.U.!” he shouted at the start of his speech after being handed the trophy by his Black Panther costar, Danai Gurira.

Michael B. Jordan picked up the prize for Outstanding Supporting Actor in a Motion Picture for his turn as Killmonger.

Ryan Coogler took the stage after flanked by several of the film’s stars including Nyong’o, Gurira, Wright, Boseman, Jordan, and Winston Duke and delivered a touching acceptance speech.

“Thanks to the audience that went out and embraced this film,” he started. “I’m gonna do what a lot of us should do, which is step back and let the brilliant women talk.”

Danai Gurira, Letitia Wright, and Lupita Nyong’o stepped up to the mic even though production was signaling to them to wrap things up.

“What we were gonna say is the power of this moment to us really feels like the power of Pan-Africanism,” said Gurira before recounting her mother’s past exchange with Dr. Martin Luther King, Jr. that prompted the entire crowd, including Beyonce, to rise to their feet.

“The beauty of this project is that we as a diaspora made this film successful and we’re just getting started.”