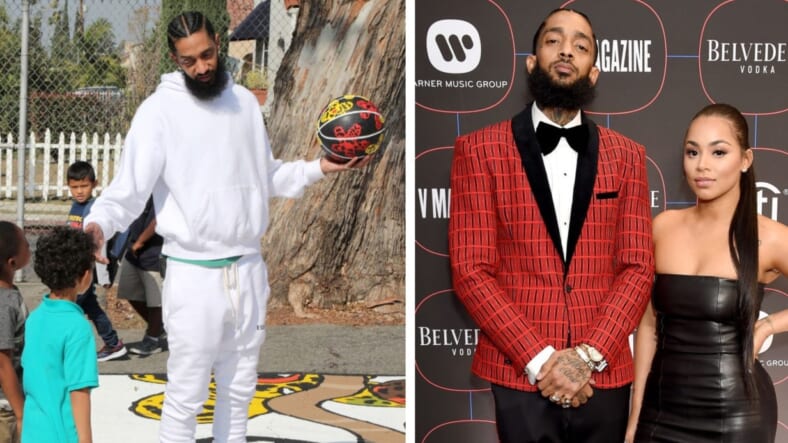 I thought of all of these traits as I sat at my computer tasked to write about the life and death of Nipsey Hussle.

But, mostly I thought about love. Nipsey Hussle was known for love.

Born Ermias Davidson Asghedom in Los Angeles to an Eritrean father and an African American mother, Nipsey Hussle was known to love the city of his birth. He repped L.A. to the fullest in his music and in his movements.

With the earnings from his music, he had recently begun to invest in real estate in his beloved South Central. His newest business investment was Vector90, a 4,700 square foot co-working space where monthly memberships included a mailing address, internet access, and office supplies. Vector90 also has an entire floor dedicated to teaching STEM to students in South L.A., and Nipsey had goals to expand STEM programs across the country. He had a passion for education and children.

Having acted in several small roles, Nipsey Hussle was planning to move deeper into the film arena and was working on a documentary on the life of Dr. Sebi, a Honduran herbalist and healer. Dr. Sebi advocated using food as medicine and his teachings are a large part of the push toward veganism growing in the Black community. Dr. Sebi’s death in 2016 in shrouded in controversy, and therefore the fact that Nipsey was planning to produce a film about his life has sparked conspiracy theories about his own death.

Nipsey Hussle loved hip-hop. Last year, prior to the release of his acclaimed final album, Victory Lap, the L.A. Times called Nipsey “music’s biggest disruptor,” for his unique approach to marketing and sales. The album debuted at #4 on the Billboard Hot 100 and was nominated (and highly favored) for a Grammy for Best Rap Album. It later lost to Cardi B’s Invasion of Privacy.

Nipsey believed in the power of hip-hop and the spirit of the entrepreneurship that is inherent to the culture. He often gambled on the culture. In 2013, Nipsey created the Proud2Pay project by selling 1,000 copies of his Crenshaw mixtape for $100 each. The mixtape sold out in 24 hours with Jay-Z buying 100 copies on his own.

Proud2Pay wasn’t his only gamble. Nipsey left his first label deal at Epic Records in 2010, and started his own label All Money In. He released a number of mixtapes including The Marathon and The Marathon Continues. The series would be the inspiration for his clothing company, The Marathon Clothing for which he opened a storefront in South Central outside of which he was gunned down.

His independent spirit and approach to making music garnered him the respect of his musical peers and he was a frequent collaborator with Los Angeles rappers including YG, Tyga, Jay Rock, and Kendrick Lamar. His collaborations often crossed the lines of his own Crip affiliation, a testament to the power of hip-hop music.

With Victory Lap in 2018, Nipsey Hussle had seemed to finally come into his own. Nearly a decade after the start of his career, Victory Lap is his debut album. The critically-acclaimed project features appearances by YG, Puff Daddy, Kendrick Lamar, as well as CeeLo Green and Marsha Ambrosius. The word “legend” had become one that was offered up to describe him as an artist and he was poised to step into the description.

His legendary status was secured on yesterday March 31, 2019, when he was shot and killed (and two others were wounded) by an unknown assailant.

Lastly, one of the the most enviable loves of Nipsey Hussle’s life was that of his relationship with model/actress Lauren London. The pair was recently featured in a spread in GQ where they were photographed in a dreamy set of pictures that looked like they were straight out of a romantic fantasy.

Nipsey and Lauren appeared to have an easygoing and true love. They were often photographed gazing into each others eyes. The pair were the heads of a blended family that included his daughter, Emani, from a previous relationship and her son, Kameron, whose father is Lil Wayne. The two shared a son, Kross, who is only two years old.

Nipsey was open and genuine in his love for Lauren. Their passionate relationship was one to be admired because it was so rare in hip-hop to see. It is in the loss of this man who openly loved his woman and his children that Nipsey Hussle’s absence feels so palpable. He was humanized by their love and it is they who will hurt the most, and as a culture, we ache for their loss while acknowledging our own.

When I met Nipsey Hussle in 2013, it was just after the release of the Crenshaw mixtape. The massive success of the Proud2Pay project was a talking point during our interview and he was patient, kind, and thoughtful in his responses. He had recently partnered with Karen Civil to form The Marathon Clothing (with Steve Carless and Jorge Peniche). I was inspired by his unshakeable faith in himself and in his art and remained a fan for the years that followed.

I have written more than a few obituaries for rap artists. My essay entitled Thoughts On My Beloved for my friend Proof (of D12) went viral in 2006. Obituaries are never easy to write. They are, in fact, a painful yet inevitable part of life.

But, this one, for Nipsey, hurts in a visceral sense.

Hip-Hop has been here before. We have watched young, Black men make the music that makes us move, motivates us, and gets us through the hard times travel on to that place beyond the stars so many times that it almost seems normal. But, it is not.

It is not normal to bury an artist, a father, a lover, a son, a friend in his “Jesus Year,” at 33. It is not normal to feel the agony that only a death by gun violence can evoke. We call on the Los Angeles Police Department to solve this case and bring a modicum of justice to the loss of the life of Nipsey the Great. Still we know that justice will only be compounded by the pain that his killer might be another young Black man.

Still, we must say goodbye to another hip-hop legend. Born into this life Ermias Davidson Asghedom on August 15, 1985 and departed as Nipsey Hussle on March 31, 2019. Travel on in light, Nip. We will love you always.