Oprah sets fan straight: she was granted permission to call Maya Angelou by her first name

Oprah responds to criticism over her tribute to Dr. Maya Angelou. 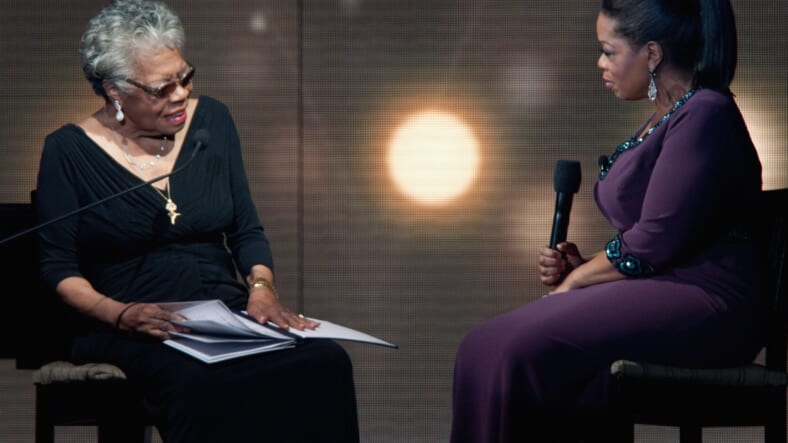 Maya Angelou and Oprah attend Surprise Oprah! A Farewell Spectacular at the United Center on May 17, 2011 in Chicago, Illinois. (Photo by Daniel Boczarski/Getty Images)

Oprah Winfrey set the record straight for a fan who questioned whether she had the right to refer to Dr. Maya Angelou without the “Ms.” title prefix.

The hoopla follows a widely shared television clip showing Angelou correcting a young woman who dared to call her by her first name when asking her a question. In a tribute commemorating Angelou’s birthday on Thursday, Winfrey wrote on Instagram: “Maya would have been 91 today! This is my favorite picture of us. Even in death, I feel the “unbroken continuity” of her mother-sister-friendship reference in the Henry Scott Holland canon ‘Death is Nothing At All.’”

Maya would have been 91 today! This is my favorite picture of us. Even in death I feel the “unbroken continuity” of her mother-sister-friendship referenced in the Henry Scott Holland canon ??❤️ Death is nothing at all. I have only slipped away to the next room. I am I and you are you. Whatever we were to each other, That, we still are. Call me by my old familiar name. Speak to me in the easy way which you always used. Put no difference into your tone. Wear no forced air of solemnity or sorrow. Laugh as we always laughed at the little jokes we enjoyed together. Play, smile, think of me. Pray for me. Let my name be ever the household word that it always was. Let it be spoken without effect. Without the trace of a shadow on it. Life means all that it ever meant. It is the same that it ever was. There is absolute unbroken continuity. Why should I be out of mind because I am out of sight? I am but waiting for you. For an interval. Somewhere. Very near. Just around the corner. All is well.

One fan clutched her virtual pearls. “Ms. Angelou to you Oprah. You have no license to call her Maya. She will always be Ms. Angelou,” the woman said in a response to Winfrey’s post, according to Page Six.

—Sherri Shepherd on her former boss Barbara Walters of ‘The View’, “I cried for three years straight”—

The comment prompted Winfrey to set the record straight. The media mogul told the commenter that actually she does have the right to call Maya by her first name and that the late poet and author gave her permission years ago.

“She actually gave me permission after the 2nd or 3rd visit to her home to call her ‘Maya,’” Winfrey responded. “Believe me, I’ve witnessed when other folk did NOT have that permission!”

Winfrey’s response was liked more than 16,000 times and has prompted more discussion on the topic.

One famous singer even had Winfrey’s back.

John Mayer weighed in with this comment: “When Oprah claps back – look down,” he wrote. One of her hands is your face. Now look in the mirror. That’s right; you have seen Oprah hands for a face. You’re tripping. This is due to the dusting of neurotoxins from the clap. You will wake up at the job you had in high school, but at the age you are today. In your pocket, you will find a note that says ‘do better.’”

Let that be a warning.