'That man wholeheartedly loved this woman...' In an exclusive interview, Nipsey Hussle's friend and business parter Karen Civil, and his brother, Samuel Asghedom, remember his legacy as a family man. 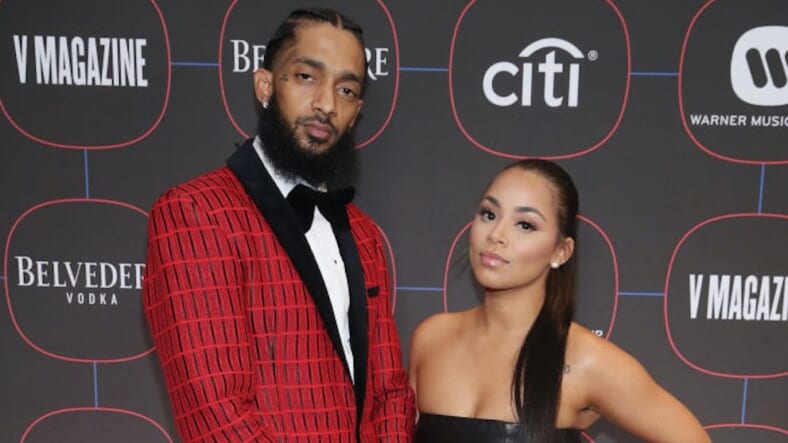 (Credit: Getty Images)
In the wake of the tragic murder of rapper and entrepreneur Nipsey Hussle, new details are emerging about the legacy of love and family he leaves behind.

In an interview with theGrio, Hussle’s close friend and business partner, Karen Civil, opened up about his deep love for longtime partner, actress Lauren London.

“The great thing I got to see with him is the way he loved Lauren, and the way they poured into each other,” Civil tells theGrio. “People talk about Black love, but this was Black love. To see the way they look at each other- you saw the GQ piece they did.”

Rest in peace to Nipsey Hussle. The GQ community sends its love to Lauren London and the family.

Hussle and London began dating in 2013 and the pair became a family, now sharing a son along with Hussle’s daughter and London’s older son.

The two had just finished filming “The Couples Quiz” segment for GQ, in the weeks leading up to Hussle’s murder.  As they gush over each other and reflect on how they first met at his store, Hussle easily remembers the last book London read.  The video has earned more than 9.4 million views on YouTube.

Nipsey Hussle, born Ermias Asghedom, is remembered for not only being a devoted partner, but also being a great brother, son and father.

“You know he was 100 percent involved in his children going to school,” Asghedom tells theGrio.

“He had tutoring for his daughter and he was happy about her grades being good. Everybody was in the household together. He was waking up playing with his son,” he explains.

“You know he would take his daughter to school. Before they would stop off at my grandmother’s house… He would see my grandma every morning and they would bring her a healthy green juice so she would see [her] granddaughter.“

Civil also reflects on Hussle’s protective instincts for his family and friends. Even if an internet troll left disparaging remarks on her page, Hussle, would reliably step in to defend her.

“He didn’t do that display of disrespect, especially to women around him,” Civil tells theGrio.

“Nipsey led by example in every sense of the way. From how to be a great human being, how to be a businessman, how to be a father and how to be a Black man who loves a Black woman,” she continued.

“Which we don’t get to see often because at this point Black women are the most disrespected women out and Nipsey was not going for that notion.”

Hussle will be memorialized this week at the Staples Center in Los Angeles. Tickets for the event sold out within minutes.

Read more from the full interview with Karen Civil on Nipsey Hussle’s life and legacy in theGrio’s Entertainment and News Section.