Tickets for Nipsey Hussle’s Public Memorial are Gone within Minutes

Complimentary tickets for the public memorial service for slain rapper Nipsey Hussle were sold out in less than a hour on Tuesday morning. 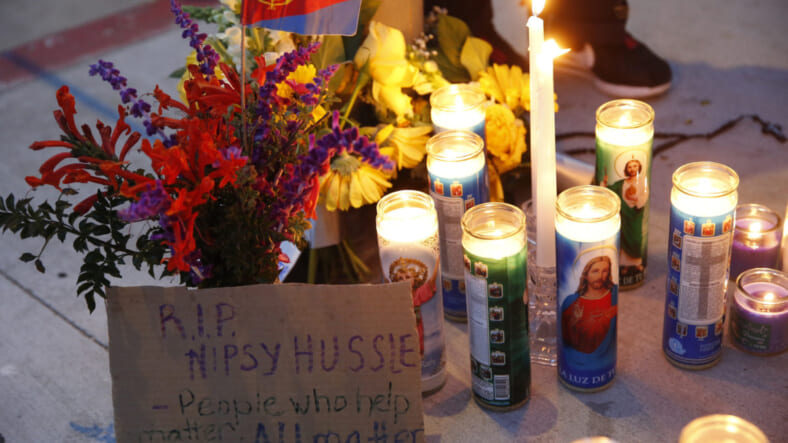 *Complimentary tickets for the public memorial service for slain rapper Nipsey Hussle, (born Ermias Asghedom), were sold out in less than a hour on Tuesday morning.

Tickets were available on a first-come, first-serve basis starting at 10 a.m., but 40 minutes later, an image on the Staples Center website read: “All tickets for the Nipsey Hussle’s Celebration of Life have been distributed and no additional tickets will be available,” New York Daily News reports.

The West Coast icon, known for his philanthropy and community service, will be honored Thursday morning at the 21,000-seat area located in downtown Los Angeles.

Hussle, 33, was fatally last Sunday afternoon outside his Marathon clothing store in Hyde Park. The suspected gunman, Eric Holder, was apprehended after a 48-hour manhunt. He is currently being held on a $5 million bond. He is being represented by famed attorney Christopher Darden, best for the O.J. Simpson case.

Holder has been charged with murder and attempted murder. He pleaded not guilty at an arraignment last week. He faces life in prison if convicted.

Sources close to Hussle tell TMZ that his procession will pass his clothing store and other notable locations as it travels through South L.A. following Thursday’s memorial service. Security is expected to be tight at the event and “cameras and recording devices will not be permitted inside the venue,” the public announcement for the service said. Additionally, no backpack or large bags will be permitted inside the venue.

A death certificate noted Hussle’s time of death was 35 minutes after he was shot multiple times outside his store, according to TMZ.

His memorial is set to begin at 10 a.m. and will be free to ticket holders and California residents only. Each attendee could receive a maximum of four tickets. Tickets can not be left for pick up at will call, NBC Los Angeles reports.