For colored girls who have considered singledom when think pieces in The Guardian are enough. 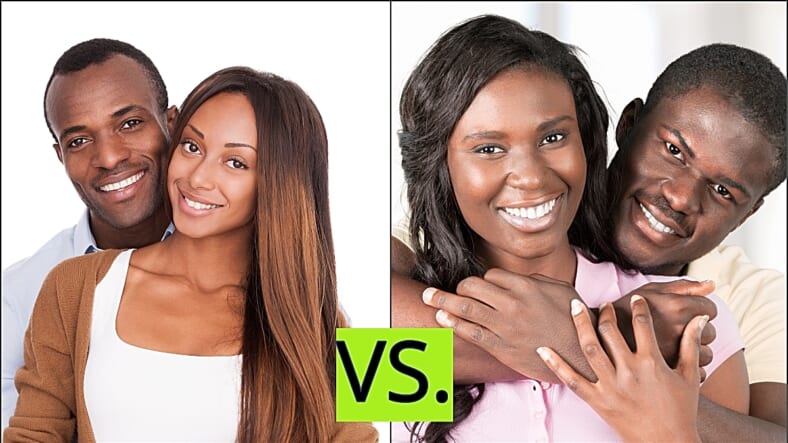 Writer Kyra Kyles reacts to a recent article in The Guardian that goes too far and doesn't go far enough suggesting that dark-skinned women aren’t being considered as marriage material. (photos courtesy of Adobe stock images)

If we’re being honest, “The Blacks” already have so many things topping our collective agenda there really isn’t much room left for any kind of self-enforced colorism.

You get the picture, hopefully in high def.

Yet, here we sit, somewhat deeply divided by yet another digital discussion of #teamlightskin versus #teamdarkskin.

READ MORE: It’s Complicated: Why some Black women refuse to call the police when their Black male partners threaten their lives

This latest battle royale comes courtesy of a recent column in The Guardian, one in a series of articles about the color-coded caste system invented by White enslavers. Opinion writer Dream McClinton starts off “Why Black Girls Like Me Aren’t Getting Married” with a raw, honest look at one Black woman’s experience in her self-described “mahogany” skin.

McClinton shares a heartbreaking story of a “biracial, hazel-eyed” classmate who taunted her when she was a kid with the idiotic insults after watching a documentary about slavery in history class that obviously McClinton would have been a slave out in the field instead of working in the home because of the complexion of her skin, despite the fact that neither position should be of any desire.

Though writing you’re a “redbone” on a mortgage loan application won’t save you from predatory rates, foolery persists to this day with lighter skinned people receiving more lenient prison sentences and better job opportunities. There are entire rap and R&B catalogs, as well as Hollywood leading ladies’ careers, built on the back of society’s light bright obsession.

While there are no lies detected when McClinton says that darker skin is typically cast as “lesser than,” it gets tricky when her provocatively titled story serves up a stew of statistics and intimate, personal experiences to reach one overarchingly damning conclusion.

Amid her own painful experiences on various dating apps, McClinton weaves in a source that says Black men are only dropping to one knee for the lightskins, based on aggregated data from Multi-City Study of Urban Equality from 2003.

While I don’t doubt some men prefer what they believe are “exotic” women and many of us need look no further than Instagram to find a crop of color stricken thirstbuckets, I was taken aback by the findings from the Ohio State University professor who led McClinton to surmise that “55% of light-skinned women were married, while only 23% of dark-skinned women had jumped the broom.”

Who was surveyed during the course of this research? Kodak Black, A$AP Rocky, Ludacris and an assortment of 90s-era music video directors? And, how did their statements lead to such a conclusion? You might glean more insight by cross-checking such figures with the LOVE section in old JET magazines featuring newly married Black couples and searching for #BlackLove on Instagram.

Instead, McClinton attempts to underscore those responses with personal observations about dating. It is not my MO to question the veracity of someone’s lived experience, as that is what gives rise to such nonsense as #AllLivesMatter or #NotAllMen.

Still, if anecdotes are fair game, I feel it’s permissible to share that I know a lot of married, deep mahogany skinned women. I myself, who could not pass anybody’s brown paper bag test, have been proposed to twice. Plus, let the record show that marriage is not as popular as it once was for members of any racial group.

Don’t get me wrong. I truly empathize with McClinton’s struggles, but I would be wary of extrapolating them into an unnecessarily bleak determination about lifetime commitment. Even one of McClinton’s own sources, Black matchmaker Julie Wadley, seemingly shares a similar fear about the tone of the article as it was being written. McClinton reveals:

“Still, Wadley tells me, she hoped I’m not writing a ‘woe is me, nobody wants dark-skinned girls’ article. I wince hearing it, hoping for the same, deep down.”

Clearly, this is a topic that requires a much more in-depth and nuanced examination based on more than one individual’s experience.

Unfortunately, McClinton fell into the very trap she was trying to avoid. The Guardian and McClinton should have realize that the subject of Black marriage and the politics of skin color, or lack thereof, cannot be boiled down into a few simple opinion pieces, no matter how compelling the personal reflections. It might be a place to start, but much further interpretations are needed to truly create a balanced and fair understanding of the truth.

Kyra Kyles is a nationally known multi-platform media executive, author, and speaker on media diversity.  In addition to her 20-plus years as a journalist, including a tenure as Editor-in-Chief and Senior Vice President of Digital at EBONY and a multimedia correspondent/columnist for the Tribune Company, Kyra is the Chicago-based co-founder of content development collective, Myth Lab Entertainment and a contributor to outlets including TheGrio and Bustle. Follow and interact with her via @thekylesfiles on Instagram, Facebook, and Twitter.