Atlanta city leaders are still moving to place markers on monuments to the Confederacy around the city, but the project is running into red tape 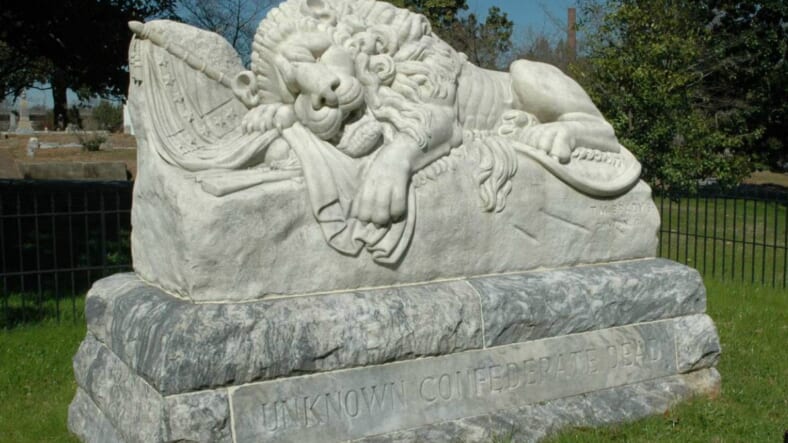 Over the past year, protests regarding the presence of Confederate statues, monuments, buildings and street namesakes have forced many southern cities to reckon with their troubled pasts, including Atlanta. Now plans to make a much needed change have hit a snag.

Atlanta officials agreed to add contextual markers to four Confederate statues that cites slavery as a factor in the Civil War. According to the Atlanta Journal-Constitution, a City Council committee charged with implementing the overall plan, which includes the markers, projected in January that they would be installed by late spring. Now, it looks like the project may not be completed until the end of the year.

According to AJC, the monuments set to receive the markers are the Confederate Obelisk and Lion of Atlanta in Oakland Cemetery; the Peace Monument in Piedmont Park; and the monument at the intersection of Peachtree Battle and Peachtree Roads commemorating the Battle of Peachtree Creek and North-South reconciliation

Council member Carla Smith, who heads the three-member street names and monuments committee expressed her frustration with the delay.

“I wanted to have this done by now,” Smith said.

The AJC reported that during a Wednesday meeting, members discussed reasons for the delay, which include deciding who will pay for the signs and the process of getting the proposal vetted and approved by other city departments before it’s voted on by the full council.

Though the monuments are technically owned maintained by the city, they were not originally erected by the city, the AJC reports. So it has been necessary for council members to work with historic conservation foundations in the process of deciding how the markers would be paid for. Smith went on to say that a donor has agreed to pay for the markers at $2,000 each and would donate them to the city.

With more decisions to be made before the changes can be implemented, Council Member Michael Julian Bond called for the city to take responsibility.

“I think the city should completely own this, embrace it,” Bond said.