Black marijuana business owners are making their mark in a predominantly white industry. 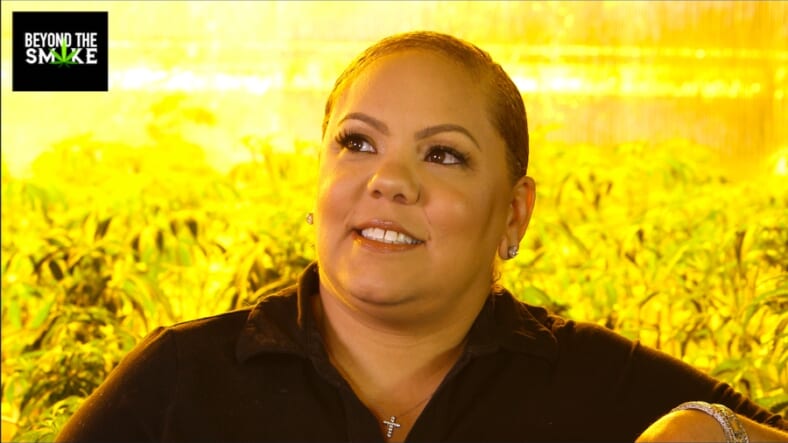 Tarsha S. is one of the few Black women entrepreneurs in the cannabis industry. (theGrio)

She’s not your typical cannabis owner.

In a booming marijuana industry where the majority of people calling the shots are White and male, Tarsha S., is setting out to change the game.

She runs The Green Dragon, a marijuana dispensary she co-founded with her husband in 2007 in Northern California.  It’s a one-stop shop, where her team grows cannabis plants in the back of the facility and sells products in the front.

As a native of Prince Georges County and former writer, Tarsha says she grew up in a fairly conservative community and never thought she would end up in the business.

Her husband, Glenn, a music producer, introduced her to the idea and got her onboard by explaining the medical benefits.

“Definitely when we started this business, my views were very conservative. But it’s changed knowing the patients that are benefiting from the use of cannabis,” she says.

“Cannabis can heal and help people cope with pain,” she continues.

Now they’re planning to open up a high-end luxury cannabis lounge in Palm Springs, California, expected to be the first of its kind in Southern California.

“It’s definitely going to be a tourist attraction. And our selling point for the business is we’re offering you an experience,” says Tarsha, who has named the business Coachella Valley Green Lounge.

“So you’re not just coming to consume cannabis but you’re coming into our world of the arts as well. So we’ll have live musicians playing, there will be a jazz night. There will be cannabis yoga on the rooftop.”

The Weed Business Is No Joke

Tarsha runs her business in a state where marijuana is legal both recreationally and medically.  But she has to meet a lot of legal standards to keep the business open and in compliance.

“Every month we have to get tested to make sure that our plants don’t have pesticides,” she said.

“There’s a lot of maybe trivial thoughts that go on about being the cannabis owner. ‘Oh people are just getting high.’ Not necessarily. There’s so much that we have to do day in and day out just to stay in compliance,” explained Tarsha.

In addition to having their plants tested, Tasha has attorneys on payroll, pays taxes, and files regular paperwork.

The high cost of entry is one of the things that makes it difficult for Black owners to break into the marijuana economy.  It’s now a $10.4 billion dollar legal industry in the United States, where an estimated 4.3 percent of owners are Black.

“I think that the compliance laws are so rigid that there are so many hoops that you have to jump through,” said Tarsha.

Social equity programs are meant to tilt the imbalanced scales against people of color. Their mission is to make cannabis job opportunities more available to low-income communities who were negatively impacted by criminalizing weed.

Tarsha plans to use a social equity partner for her new luxury shop in Palm Springs too.

“It’s really important to me that we get lawmakers to get on board with social equity partnership,” she says. “I think that’s the key for African-Americans and women to be owners.”