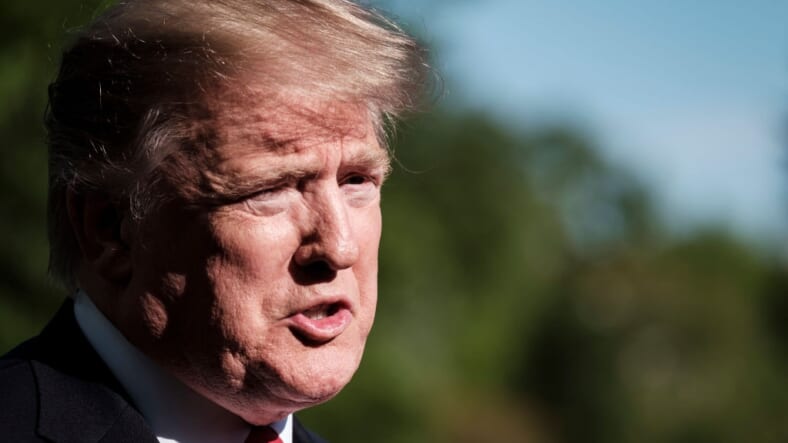 President Trump continues to divide the country with his reckless Twitter posts. (Photo by Pete Marovich/Getty Images)
President Trump once again used Twitter to speak on the NFL, congratulating the number two overall pick, Nick Bosa, but many online noticed the snub of the first selection, Heisman trophy winner Kyler Murray.
Murray is a product of the University of Oklahoma and was selected to be the new quarterback and de facto face of the Arizona Cardinals franchise, but he did not receive any acknowledgment from the president. Bosa, formerly with  Ohio State and now with the San Francisco 49ers, received presidential praise that  concluded with “MAKE AMERICA GREAT AGAIN!”
See below:

Congratulations to Nick Bosa on being picked number two in the NFL Draft. You will be a great player for years to come, maybe one of the best. Big Talent! San Francisco will embrace you but most importantly, always stay true to yourself. MAKE AMERICA GREAT AGAIN!

According to Market Watch, fans and analysts took to social media to point out that Murray being Black, while Bosa is White, as an initial reason for the top pick not being acknowledged.

Kyler Murray, the #1 pick, who won the Heisman Trophy… is black.

However, prior to the draft, Bosa was the center of controversy for tweets that align with right-wing enthusiasts and many of the political ideals of the president. Those tweets have since been deleted, which may point to the president’s  “stay true” comment.

The reason Trump tweeted about Nick Bosa is because he’s a known and vocal Trump supporter who’s faced some backlash. That’s it. That’s the reason.

If Kyler Murray was a known and vocal Trump supporter you can bet your ass he would’ve tweeted about him too. That’s how he rolls

Controversial tweets from Bosa included criticism of Colin Kaepernick and his practice of kneeling while the National Anthem is played. Ironically, Bosa now plays for the same franchise that Kaepernick did during his protest. Additionally, Bosa criticized Marvel’s Black Panther as the worst Marvel movie and stating that Beyoncé’s music is “complete trash.”

For Bosa, the controversy did not affect his draft stock or the way that team scouts, specifically those for the 49ers, viewed his skill. Now that he is a part of an NFL locker room, it will be intriguing to see how his reception will be.
READ MORE: Likely NBA top pick Zion Williamson referenced at NCAA corruption trial
Since the original congratulatory message, President Trump has not issued any other statements regarding the recently drafted pass rusher.