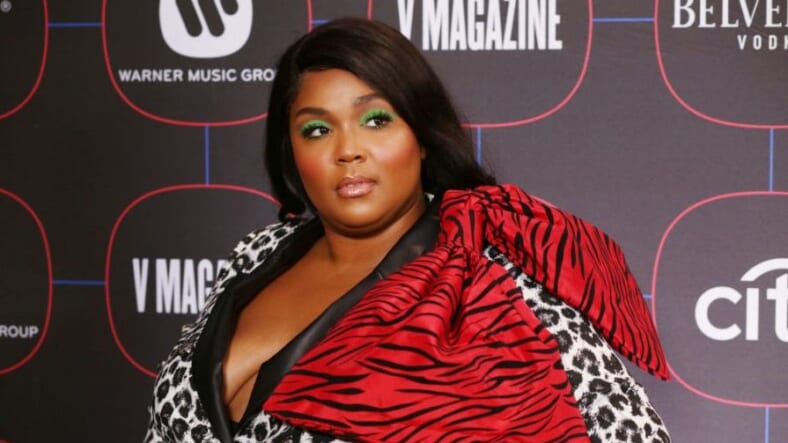 A Massachusetts resident filed a federal lawsuit in the Central District of California accusing the “Truth Hurts” artist of intentional infliction of emotional distress and invasion of privacy.(Photo by Randy Shropshire/Getty Images for Warner Music)

Lizzo will be taking the stage at the upcoming 2019 MTV Movie & TV Awards and we can’t wait to see what this beauty has in store for her first major TV performance.

The body-positive artist who is also featured in Ugly Dolls has been waking waves all over the music industry by rolling out several bangers while celebrating her curves and encouraging other women to do the same.

“I’m doing this for myself. I love creating shapes with my body, and I love normalizing the dimples in my butt or the lumps in my thighs or my back fat or my stretch marks. I love normalizing my black-ass elbows. I think it’s beautiful,” the “Cuz I Love You” singer recently  told Essence.

She’s known for delivering dynamic performances onstage and posting risqué photos of herself on social media.

“My social media is very self-serving,” she added. “I do it for me. Even if I have 500 followers and no likes, I can still go on tour selling my show out and be fine,” she says. “And I always wanna kind of keep it that way — like my social media is something that needs me more than I need it.”

Lizzo (born Melissa Jefferson) may seem like a new artist, but she released her first solo album six years ago.

“I’ve been doing the same work but just on different platforms. It just elevates,” she told ESSENCE. “There’s so much I wanna do. I feel like I’ve only scratched the surface of making it or being it. It, for me, is a long journey.”

Lizzo channels boundless self-confidence through a downright earth-quaking voice, colorful persona, and undeniable star power. In 2018 she released “Boys” which took the industry by storm and was a definitive and inescapable anthem of the year. She hit the studio in late 2018 to record her Atlantic debut album “Cuz I Love You” where she reached the precipice of a personal and creative breakthrough and introduced this chapter with “Juice.”

She also revealed that her fast-paced lifestyle makes it hard for her to slow down and enjoy the success.

“I’m so in the future all the time that smelling the roses is a struggle for me,” she says. “It’s a defense mechanism; we gotta protect ourselves ’cause this world doesn’t protect us.”

Fans will get to see Lizzo hit the stage at the MTV Movie & TV Awards on June 17 as will  Macklemore, who has also been announced as a performer.