The gift is estimated to be worth $40 million dollars. 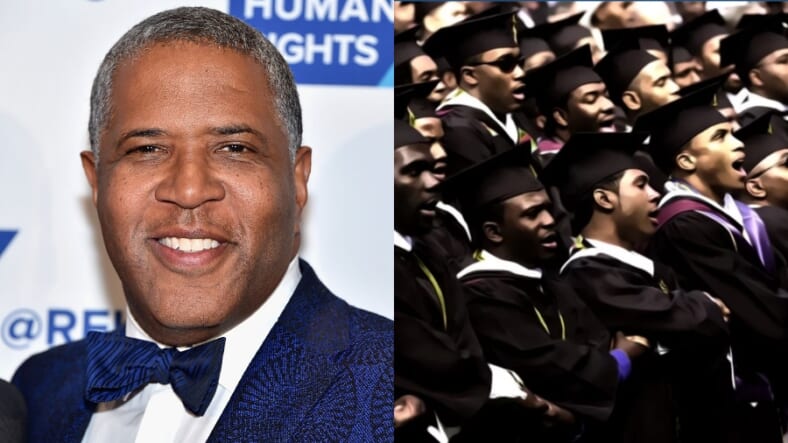 It was one of the best graduation gifts you could ever imagine getting, and an investment in the future of Black America.

“My family is going to create a grant to eliminate your student loans. You great Morehouse men are bound only by the limits of your own conviction and creativity,” Smith told the crowd of students, parents and supporters in Atlanta.

The announcement drew a standing ovation and chants of “MVP! MVP!” from the audience.

“When Dr. King said that the ‘arc of the moral universe bends toward justice,’ he wasn’t saying it bends on its own accord. It bends because we choose to put our shoulders into it together and push,” Smith said during his speech.

"My family is going to create a grant to eliminate your student loans!" -Robert F. Smith told the graduating Class of 2019 @RFS_Vista #MorehouseGrad2019 pic.twitter.com/etG8JhVA46

“You great Morehouse men are bound only by the limits of your own conviction and creativity,” Smith said during his remarks.

Smith has been committed to promoting technological and scientific advancement in the African-American community for years, and also donated 1.5 million dollars to Morehouse College earlier this year.

What’s it like to be Black and in tech at SXSW? theGrio visits Austin, TX

He talked about the need for African-Americans to be part of tech innovation in his commencement speech.

“There are those who dismiss our brothers and sisters as not having the training or the skills to take part in this Fourth Industrial Revolution, the 21st century tech-based economy,” Smith stated. “This is not true and this belief is not acceptable!”

Smith’s 20 million dollar gift to the National Museum of African-American History and Culture was the second largest single donation to the museum from a private donor. The philanthropist and former engineer, built his own investment business that focuses on technology and software, called Vista Equity Partners.

Smith is a graduate of Cornell University and Columbia Business School.  He is also a member of Alpha Phi Alpha Fraternity, Inc.

In 2018, Smith was Number 480 on Forbes global list of billionaires. His net worth is estimated to be $5 billion dollars, according to Black Enterprise magazine.