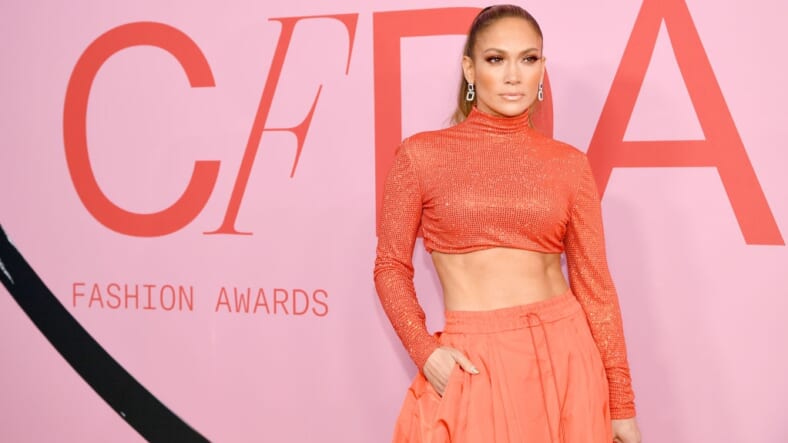 JLo opens up about her past marriages and why they don't all matter. (Photo by Dimitrios Kambouris/Getty Images)

Jennifer Lopez is known for being a triple threat–  singer, actor and dancer– but many have long been fascinated by her love life and multiple marriages.

The Bronx-born diva is currently on the road for her 50th birthday tour, and in a new behind-the-scenes mini documentary, Lopez opens up about her love life and forthcoming wedding to Alex Rodriguez — while taking shots at her first two marriages.

The former MLB star proposed to JLo. in March, after more than two years together. He was previously married to Cynthia Scurtis from 2002-08, and they share two daughters Natasha and Ella. Rodriguez will be Lopez’s fourth husband, and she hopes they tie the knot “soon but next year,” she says, PEOPLE reports.

Lopez was previously married to Ojani Noa from 1997-98 and Cris Judd from 2001-03, but she doesn’t recognize them because the romance with each was short lived.

“I’ve been married three times: once was nine months and once was 11 months. So I don’t really count those.”

Lopez was also married to Latin singer Marc Anthony from 2004-14, with whom she shares 11-year-old twins Max and Emme.

Lopez, who famously dated Sean ‘Diddy’ Combs and Ben Affleck, admits she got married for all the wrong reasons when she was young and coming up in the entertainment business.

“It seems like in this life you’re always surrounded by people so you’re never lonely but it’s very lonely. So you always want somebody with you,” she said. “So I felt like if I got married then I would always have somebody but that’s not how life works. That’s not how it goes, a bad reason to get married. Not the right one, the wrong one.”

Jenny from the Block believes “The right one is when you find somebody who makes you better.”

A. Rod, meanwhile, recently gushed about his lady-love on Twitter, giving her props for “all the hard work” she has put into the tour, and noting how he’s having a blast watching Lopez bring her vision to life.

5 shows down, many more to go! Continue to be in awe of @JLo for all the hard work she put into this tour and bringing her vision to life. Having so much fun watching you do what you love. Proud of you, baby! ❤️ #JLOItsMyParty #ItsMyParty pic.twitter.com/Pl6RLtT7cN

The couple has reportedly started planning for their big day, and a source tells PEOPLE,  they may opt for “a small family celebration that will, of course, include all four kids.”