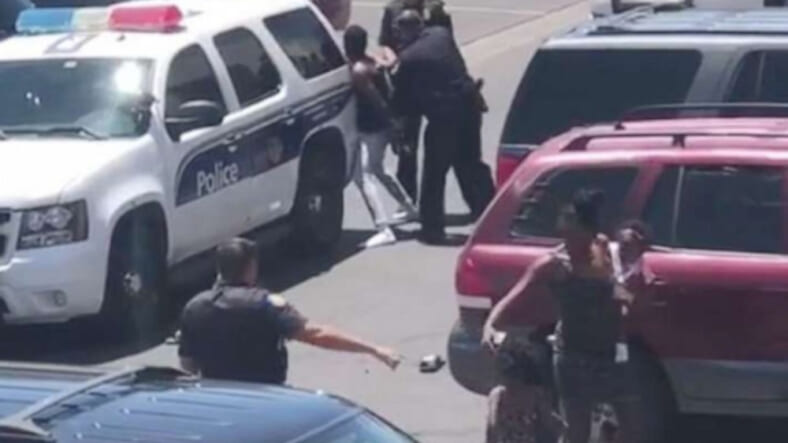 Phoenix Police Chief Jeri Williams offered an apology for a disturbing incident caught on video between out-of-control police officers and a young family on May 29.

Williams told family members that officers should not have pointed guns and yelled profanities as they responded to a Family Dollar store’s report of shoplifting, according to AZ Central.

A bystander reportedly captured the footage outside an apartment complex after the family left a Family Dollar store location back in May but the video went viral last friday.

Parents Dravon Ames, 22, and his pregnant fiancee, Aisha Harper, said they were completely unaware that their 4-year-old daughter had taken a doll from the store, but that officers responded by pointing guns and yelling obscenities at them and their two young daughters. A viral video released on Friday back up their claims and show the harrowing encounter that has many calling for the officers to be fired.

The family has responded to the incident by filing a $10 million claim against the city for civil rights violations by police officers, according to the AZ Central.

Williams said she will oversee an internal investigation into the incident.

Phoenix Mayor Kate Gallego, also posted an apology to the family on her Twitter page Saturday.

“I, like many others, am sick over what I have seen in the video depicting Phoenix police interacting with a family and young children. It was completely inappropriate and clearly unprofessional. There is no situation in which this behavior is ever close to acceptable. As a mother myself, seeing these children placed in such a terrifying situation is beyond upsetting,” Mayor Gallego writes in the post.

“I am deeply sorry for what this family went through, and I apologize to our community. This is not who we are, and I refuse to allow this type of behavior to go unchallenged. I have spoken directly with our Police Chief, City Manager, and our Public Safety Subcommittee Chairman.”

The officers in the video have reportedly been placed on desk duty during the investigation.

The parents’ attorney said the child and father were injured in the violent encounter.