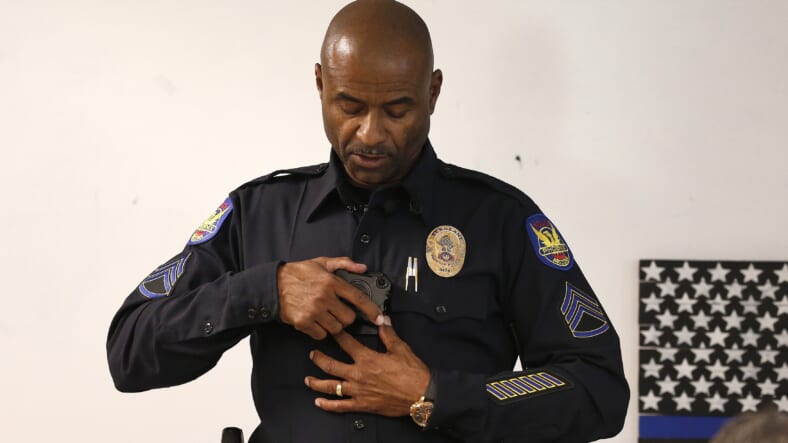 Phoenix Police Department Sgt. Kevin Johnson demonstrates the new Axon Body 2 body camera to fellow officers as another precinct gets their cameras assigned to them Wednesday, July 3, 2019, in Phoenix. Although body-worn cameras are becoming a police standard nationwide, Phoenix was among the last big departments to adopt their widespread use. (AP Photo/Ross D. Franklin)

A Phoenix police officer yelled obscenities and forced an unarmed black man suspected of shoplifting up against a patrol car. Another aimed his gun at the man’s pregnant fiancee, ordering her out of the car with the couple’s two small children.

Dramatic video of the confrontation stirred outcry last month, and it came from bystanders’ cellphones rather than from officer-worn body cameras.

The police weren’t wearing them.

Although body-worn cameras are becoming a police standard nationwide, Phoenix was among the last big departments to adopt their widespread use. Leaders of Phoenix, the fifth-largest U.S. city with about 1.6 million people, quickly moved to fix that after the video emerged.

“Every single precinct will have body-worn cameras by August,” Mayor Kate Gallego said after the May confrontation she called “completely inappropriate and clearly unprofessional.”

The couple said their 4-year-old daughter took a doll from a store without their knowledge and rejected police suggestions they stole, too. No charges were filed. The couple has filed a $10 million legal claim against the city, alleging civil rights violations.

The department has had several hundred cameras for years, but it wasn’t until February that city leaders approved $5 million to buy and maintain 2,000 devices for a force approaching 3,000 officers. About 950 cameras were being distributed this week.

The purchase followed a city-commissioned National Police Foundation study that says Phoenix police had more officer-involved shootings than any other U.S. department last year. A separate database that tracks fatal shootings by police showed Phoenix officers also killed more people than any other agency in 2018.

The use of body cameras has burgeoned over the past decade following several high-profile killings of black people by mostly white officers in places like Ferguson, Missouri, and Baltimore.

When a Missouri grand jury in 2014 decided not to charge a white officer who fatally shot unarmed African American 18-year-old Michael Brown, his family called for police nationwide to use cameras.

Cameras are supposed to promote accountability and transparency and reduce officers’ use of force. A survey by the Washington-based Police Executive Research Forum says U.S. law enforcement agencies overwhelmingly support using them. A third now use cameras and nearly 47% plan to adopt them.

“When body-worn cameras first came out, there was some trepidation among officers that use of cameras would have unintended consequences,” said Chuck Wexler, the group’s executive director. “The reality is working cops now feel it is an essential part of defending what they do.”

The New York Police Department, the largest in the U.S., completed its rollout of some 20,000 body cameras early this year.

Around the same time, Phoenix police said they would speed up camera distribution after the study said they opened fire more than any other department last year.
“In 2018, Phoenix police faced more subjects armed with guns (or simulated guns) than in years past, and were no more likely to shoot at an unarmed subject than in years past,” the National Police Foundation report said.

The findings weren’t surprising to many Hispanics and other minorities in the Phoenix area, who remain wary of law enforcement because of past racial profiling under Sheriff Joe Arpaio. He was convicted of contempt of court two years ago for ignoring a 2011 order to stop patrols targeting Hispanics, then pardoned by President Donald Trump.

Police departments in Phoenix and a handful of other cities also are investigating a database that appears to catalog thousands of social media posts by active-duty and former officers disparaging Muslims, black people, transgender people and others.

The recent video of the black couple left many in Phoenix’s communities of color clamoring to describe their own encounters, revealing distrust, fear and resentment of police. They have called for wider use of body cameras and an independent review board to let residents weigh in on police behavior.

City leaders this week discussed a civilian review board, a move long opposed by the powerful police union.

The Phoenix Law Enforcement Association views body cameras as a valuable tool, though they can’t show “the totality of any situation,” including nuances of body language, union president Britt London said.

Jody David Armour, a University of Southern California professor of law and criminology, said body-worn cameras “have done quite a bit of good” but only work with strictly enforced requirements.

There have been complaints of officers not keeping their cameras rolling, including an Albuquerque, New Mexico, officer fired in 2014 for repeatedly failing to turn on the device, including the night he shot and killed a 19-year-old woman.

South Bend, Indiana, Mayor Pete Buttigieg briefly pulled himself from the presidential campaign trail last month after the fatal shooting of a black man by a police officer in his city. An investigation was launched into why the officer’s body cam was not recording and the city is considering buying more cameras for the force.

But even when used correctly, “technology is not a substitute for building trust,” said Mary D. Fan, a professor at the University of Washington School of Law and author of “Camera Power: Proof, Policing, Privacy and Audiovisual Big Data.”

The experts say both sides can benefit from cameras, which are meant to push police and the public to behave better because they know they are being recorded.

The devices bring contested police actions to light, including showing an officer in the Phoenix suburb of Tempe shooting a 14-year-old burglary suspect as he ran away in January.

Another video shown to media but not publicly released shows the boy on the ground, a fake gun under his arm.