Some people break the bank planning and pulling off a wedding, but not Ashley Hicks. She wisely used items she found on Amazon to dramatically cut down the cost of getting hitched 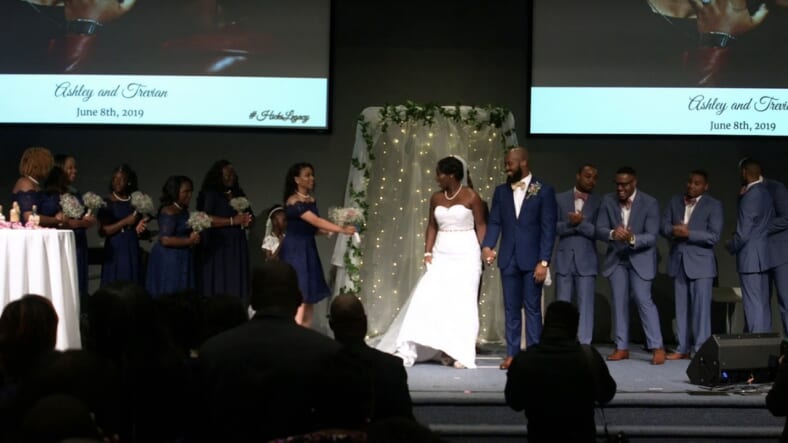 The average cost of a wedding varies depending on where you live, with $29,000-$31,000 being the median range in the United States (honeymoon not included).

But for many couples, marital life begins with massive debt accrued from wedding costs. “Nearly 50% of all couples will end up spending more on their celebration than they had originally budgeted for,” writes weddingstats.org. But one North Carolina couple was not about to break the bank for their big day.

Ashley Hicks became engaged in February and wanted a June wedding. With such a short window, she and her husband wanted to avoid going into debt for their June 8 wedding.

“I think the average in North Carolina is like $34,000 to spend on a wedding and my husband was like we’re definitely not doing that,” Hicks told local station WTVD. She turned to a wedding planner who recommended using Amazon.com for quick turnarounds of everything she needed to plan her wedding.

“We bought my dress, shoes, bridesmaid dresses, their shoes, their jewelry, my husband’s suspenders, all the groomsmen’s gifts-except bowties, our table settings, and the plates. It was a long list,” Hicks said. “We had about 150 guests, and I probably spent about $3,000 total including our food, all the attire, decorations, everything!”

Hicks said she searched for the various items she wanted at local and online stores then found something similar on Amazon, including her dress.

With good reviews and a lot of communication with the seller, Hicks found a similar style on Amazon from a dressmaker in China.

Hicks says couples can save money and stay within their budget if they use their resources wisely by exploring alternative options when planning for special occasions.

“Any event in the future, I would do it anytime,” Hicks said. “Amazon is amazing!”

In the end, their big day turned out great. Take a look at the happy couple taking their vows.